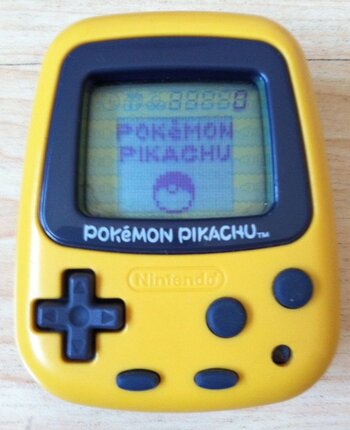 The Pokémon Pikachu (Pocket Pikachu in Japan) is a Virtual Pet toy based off of the Pokémon franchise.note In Japan it was marketed with game-inspired artwork but the NA release was marketed with anime artwork It was released in 1998 in both Japan and North America.

It is a small, yellow device similar to a Tamagotchi. It has a layout based on the Game Boy. The device works as both a pedometer and a Virtual Pet where you play with the Series Mascot Pikachu.

The more the player walks, the more watts the toy receives (with 20 steps equaling to 1 watt). Watts are used to buy Pikachu presents and gamble. Pikachu does a variety of things depending on whether it likes the player or not. It might shock or ignore players that it hates but it'll wave or play if it likes a player.

In 2000 it received a sequel toy called the Pokémon Pikachu 2 GS (Pocket Pikachu Color: With Gold & Silver! in Japan and Pokémon Pikachu Color in Europe). The Pokémon Pikachu 2 GS is less interactive than the original as Pikachu takes care of itself. It could also interact with Pokémon Gold and Silver through Mystery Gift. It was an inspiration for the Pokéwalker that came bundled in with Pokémon HeartGold and SoulSilver, to the point that it is considered part of the same product line internally and has the same 20-steps-per-watt reward system.

The Pokémon Pikachu and its successor were short-lived products but they appeared in several Nintendo video games, including Wario Land 4 and the original Nintendo 64 and Nintendo Gamecube Animal Crossing titles.

This toy provides examples of: