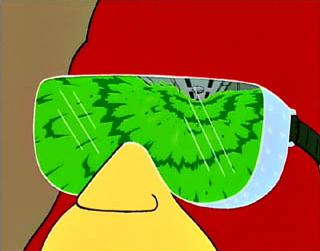 My eyes! The goggles do nothing!
Advertisement:

The Simpsons, the longest-running American primetime show in history, with its own fair share of memetic goodness. Because the show has been such a Long Runner combined with being a Fountain of Memes it's not uncommon in the modern age for new memes to spontaneously appear out of obscure scenes from episodes that haven't been referenced in years. The popular Facebook group Simpsons Shitposting

is a treasure trove of these memes.

Superintendent Chalmers: Yes, and you call them "memes" despite the fact that they are obviously forced.
Principal Skinner: Ye--I...you know th...one thing I sh...excuse me for one second.