An average guy introduced as a high-schooler living in the American Midwestern town of Quagmire, Jeremy believed he was just like any other kid, even if his family had a fairly checkered past. He was to be disillusioned of this fact as he found himself pursued by a beautiful ninja heiress and an exotic alien princess. 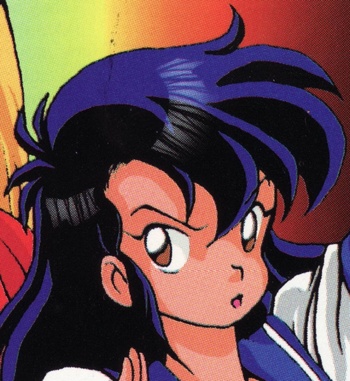 Heir to the Ichinohei ninja clan, Ichikun was eager to assume the mantle of leadership from her grandfather, Kudasai, but lost to him in a challenge for the title. He instead decreed that she must travel to the city Quagmire in the American Midwest and convince the boy Jeremy Feeple to marry her; if she couldn't, then she would not inherit the position. 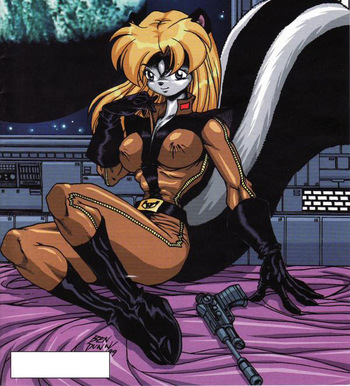 A princess of the Salusian Imperial Conglomerate, Asrial was sent to Earth by her father to Earth with a simple mission: marry a randomly selected human so that the Conglomerate could legally claim Earth as a protectorate planet, and block the maneuvering of one of their political rivals. The computer chose Jeremy Feeple, and she was sent down to convince him to wed her.

Jeremy's younger brother who, unlike his big brother, has always dreamed of being a superhero and has been training to fight all his life as a result. After the four year timeskip after his brother's 17th birthday, he finds himself inadvertently falling into a similarly chaotic life as his brother had "enjoyed" four years previously.

A skilled ninja despite only being in High School, half-brother to Lendo and Tetsuo Rivalsan on her mother's side.

An arrogant and obnoxious Salusian noble heiress banished to Earth in hopes of teaching her better manners.

An average seeming student at Quagmire High, and Ricky's girlfriend prior to Yumei and Solora showing up, Heidi is actually part of a family of super-powered Human Aliens living on Earth in disguise. In her costumed identity of Tomorrow Lass, she fights super-criminals.

A young blonde witch who is Mimi's niece, she becomes her aunt's apprentice in volume 2.

Heir to the wealthy Rival Ninja Clan, which is both a ninja clan and a megacorp, Lendo had long been in love with Ichikun Ichinohei. When he learned she had been given an Arranged Marriage to Jeremy Feeple, he pursued her to Quagmire, seeking to end the marriage by any means necessary.

A mysterious transfer student that shows up at Gundam High School during Jeremy Feeple's trip to Japan. She's actually a princess of the Zardon Empire, and an old enemy of Asrial.

A Zardon Princess, and the younger sister of Leeanna, she comes to earth seeking the secret of resurrecting the dead.
Family Members

Jeremy and Ricky's mother, and the ultimate cause behind Jeremy's Arranged Marriage to Ichikun. When her parents were killed in World War II, she was adopted by Kudasai Ichinohei and trained in the Ichinohei's school of ninjitsu, but she abandoned that life when she fell in love with an old friend of Kudasai's, the rat exterminator Bob Feeple, and moved to Quagmire with him.

The patriarch of the Ichinohei ninja clan, adoptive father of Anna Feeple and biological grandfather of Ichikun. Starts the whole series by sending Ichikun to Quagmire under orders to get married to Jeremy or else forfeit the position of heir.

Eldest son of Kenjo Rivalsan, the Rivalsan patriarch, Kuma has dedicated his life to serving Kudasai as a personal servant.

Ichikun's little sister and would-be rival for her position as heir to the Ichinohei clan.

Asrial's half-brother (same father, different mothers), who became a pirate and mercenary after being exiled from Salusia for his friendship with a Zardon.

Jeremy and Ricky's father, husband of Anna Ichinohei nee Feeple. A rat exterminator for many years, he vanished mysteriously when Jeremy was very young. He turns up in the 18th issue, where he reveals that he was accidentally transported to the world of Dimension X, a realm inhabited by Rat Men which had crumbled into ruin and was under invasious by the murderous and barbaric roach hordes. Out of a sense of compassion, Bob became a general, forging an army from the ruins of rat civilization and leading them to victory against their roach enemies before helping them to rebuild their civilization. Unfortunately, his long years of exposure to the rat-killing poison "Pregneto Conoxide" means he cannot safely use the dimension-traveling technology to return to earth, as it would interact with the energy used and fatally destabilize his molecular structure.

A time-traveling descendant of Jeremy Feeple and Ichikun Ichinohei who first appeared in issue #6, having traveled back in time to watch her father in his youth. She temporarily takes up a job as a teacher in Quagmire High, but ultimately is forced to return to her proper place in the timestream.

A German Mad Scientist obsessed with the untapped potentials and mysteries of steam, who defected and assisted the Allies during World War II. Is introduced at the series' start as the Quagmire High science teacher, and becomes Asrial's host after she arrives in Quagmire.

An old rival of Professor Steamhead's who works for Rivalsan Lendo as his personal Mad Scientist.

An old colleague of Professor Steamhead's, Professor Beanhead is a Mad Scientist who is obsessed with "beanology", the use of irradiated beans. He is the science teacher at Gundam High School in Japan, the home school of Ichikun and Hitomi Ichinohei.
Side Characters

A teacher at Quagmire Hire who looks like he could have stepped out of an 80s Action Hero movie you care to name. He's effectively been Jeremy and Ricky's surrogate father since their biological dad vanished.

A hulking and fearsome cyborg mercenary who works for Rivalsan Lendo.

A librarian descended from a family of witches whose ancestor was hanged by one of Jeremy Feeple's ancestors, Jeremiah Feeple. As her ancestor died, she cursed the firstborn of the Feeple family to suffer terrible luck upon reaching the age of 16. When she learned that there was such a Feeple alive, she sought to undo her ancestor's curse, feeling it was no longer a fair punishment.

A girl who was brought up as a boy by her father, who had boasted all throughout her mother's pregnancy that she would be a strong son and was then humiliated when she gave him a daughter. He promptly trained her to be a great martial artist and then sent her to live with her uncle in Quagmire, telling her that her uncle didn't know she was a girl and would die of shock if the truth about her gender came out..

A former desk clerk at the American superhero organization task force deployment office, she got bored and volunteered for a position in cyernetic law enforcement, being rebuilt as a powerful cyborg police-officer and then shipped to Quagmire. She was found and activated by Jeremy's delinquent friends Mikey, Howard and Phrank after being unknowingly stored in the police station basement.

Three male Salusian commandos sent to Earth to keep an eye on Jeremy Feeple and make sure he marries Asrial once the Salusians learn that the Zardons have sent their own agent to Earth.

Three female students from Gundam High School who are Hitomi and Fujiko's friends. They're all skilled fighters and often act to back them up in a crisis.

A sweet-natured vampire who got kicked out of his ancestral castle for forgetting to pay property taxes and promptly had to move in with his only living descendant, his "niece" Jesibell, who just so happens to live in Quagmire, USA.

A female cyborg from a Bad Future created by Professor Hossenfeffer conquering the world, allying with the Zardons, and then transforming Earth into a polluted cityscape, forcing humanity to upgrade themselves into robots to survive. She was sent back in time by her creators to help ensure their future came to be, only to learn she had been tricked, leaving her stranded in the past. She ultimately became a time-traveling assistant to Profesor Azland.

A team of five martial arts-practicing cheerleaders for Quagmire High's official sport's team, the "Quagmire Koalas" Led by Dane, they include Minerva, Kay, Cleo and Sandy. After the time skip, Dane goes on to become an action movie star.

A savage wild boy from a lost tribe who live on Guri-Guri Island. He arrives at Quagmire in issue #35, seeking to make Ichikun his wife. As a result, he and Jeremy fight a duel over the right to her hand.

Ricky's three best friends. Francis is Mikey's little brother, whilst Chester is Howard's cousin. All three become the second generation team of Zetramen, known as the Zetra-Rangers due to including the girl Joanna amongst their ranks.

A replacement for Kenterminator created to be Rivalsan Tetsuo's personal underling. Looks like a hulking warrior out of a post-apocalyptic manga, but is actually a robot built from chocolate.