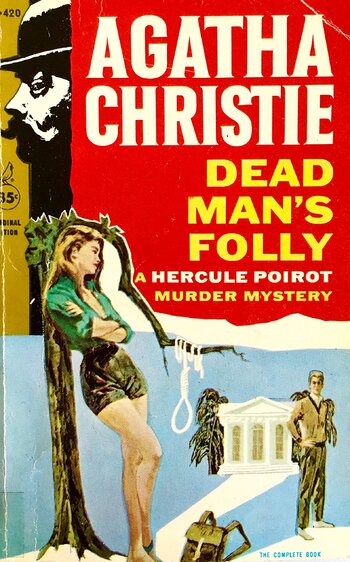 Out of nowhere Christie's Author Avatar, Ariadne Oliver, calls Poirot and summons him to her presence. Mrs. Oliver has an instinctive feeling that something wrong is happening, that someone is plotting something evil. Mrs. Oliver is at Nasse House in Devon, where the lord of the manor, Sir George Stubbs, is hosting a grand fete for the village. Mrs. Oliver has been charged with organizing a "murder hunt", a sort of spin on a scavenger hunt in which villagers will hunt around looking for clues for a fake murder. A cheerful teenager, one Marlene Tucker, will play the corpse in the murder hunt game...except that when Poirot and Mrs. Oliver go to check on young Marlene, they find that she is dead for real. Moreover, that same day of the fete, in fact at nearly the same time, Sir George's young wife, Lady Hattie Stubbs, has disappeared.

The cops decide that no one in particular would have wanted to murder a random 14-year-old village girl, and that Marlene must have seen something regarding the disappearance of Lady Stubbs that led the killer to eliminate Marlene as well. But who killed Lady Stubbs? Not her husband, who was at the fete in public view at the time. Then who? George's lovestruck secretary, Miss Brewis? Amy Folliat, whose family owned the estate until the deaths of all her menfolk in the war forced her to sell? Etienne de Sousa, Hattie's cousin who hasn't seen her in many years but showed up for a visit that very day? Either Alec or Sally Legge, the young couple renting a college on the estate? And is Hattie even really dead?