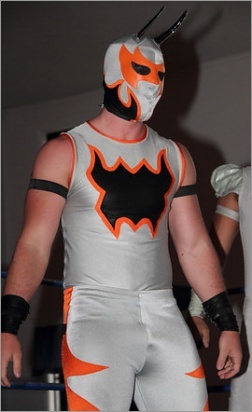 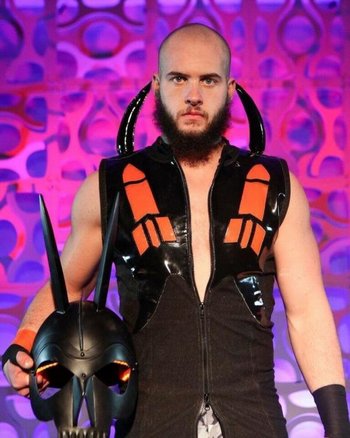 Originally known as R.B. Banks, and then as Missile Assault Ant, Missile Assault Man is an American Professional Wrestler best known for his work for CHIKARA. He debuted in 2011 and held the EPWE Underground Tag Team Titles

with Johnny Ego (better known as Juan Francisco de Coronado) as The Young Aces. He arrived in CHIKARA at Just Shadows In The Fog, March 8, 2013, as part of the debuting The Colony: Xtreme Force, who were a creation of Evil Incompetent Director of Fun Wink Vavasseur as a mockery of The Colony. In 2014, The C:XF were revealed to be part of The Flood, the amalgamation of Heel groups out to destroy CHIKARA and led by Deucalion. After Icarus destroyed Deucalion at Tomorrow Never Dies on December 6th, MAM drifted until Kevin Condron started reaching out to him. This led to Missile unmasking and joining Condron and "Juke Joint" Lucas Calhoun (formerly Volgar, a follower of Jimmy Jacobs in The Flood) as Battleborn. Condron held what was supposedly MAM's journal over him, suggesting that, under Deucalion's orders, he had been a mercenary and had blown up a bus of schoolchildren in Zimbabwe. Eventually, Condron and Missile grew sick of Condron and left him.