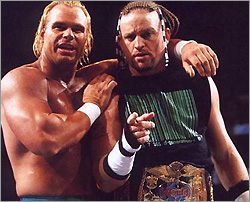 Ladies and gentlemen, boys and girls, children of all ages, TV Tropes is proud to present the SIX-TIME CHAMPIONS OF THE WOOOOOOOOOOOORLD! "The Bad Ass" Billy Gunn. "The Road Dogg" Jesse James. THE NEW! AGE! OUTLAWS!

The New Age Outlaws were a Professional Wrestling Tag Team in the WWF made up of "Road Dogg" Jesse James and "Badd Ass" Billy Gunn. The duo achieved high levels of success after joining the stable D-Generation X in 1998, becoming extremely popular and becoming of the most popular duos of the WWF's Attitude Era.

Upon parting ways with the WWF, the team reformed in several promotions, mostly notably in Total Nonstop Action Wrestling where, under the ringnames B.G. James and Kip James, they performed collectively as the James Gang and then as the Voodoo Kin Mafia (the latter of which was a play on the initials of their former boss in the WWF, Vince McMahon). The team returned to periodic active competition in WWE under its original name in 2013 (with both members also having full-time backstage jobs with the company as well, until Billy Gunn signed with All Elite Wrestling as producer in 2019).