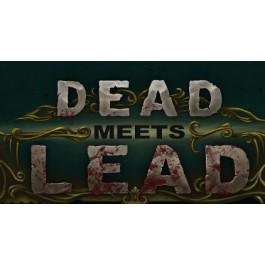 Dead Meets Lead is a Top Down Hack and Slash game by Swedish indie developer Keldyn Interactive, released on May 3rd, 2011 for PC via digital download.

It is 1716. The British Empire has uncovered evidence of a deadly plague ravaging the tropical islands of El Mirando and Rugged Nest. The Church, suspecting witchcraft and foul sorcery, assembles a strike team of good, god-fearing English soldiers to go in and clean house. However, a storm strikes their ship en-route, and it sinks with all hands save one. You are The Captain, a ruthless Blood Knight. As a fanatically devout Christian, you have sworn to cleanse the island of infection- in spite of being infected yourself.

Players control The Captain with the WASD keys to move and the mouse to aim and shoot/slash, and proceed to hack their way through hordes (and we do mean hordes) of zombies. Each level is divided into stages, and the objective is to reach a chest on the far end that contains an antidote vial to stave off the infection. At the player's disposal are three different melee weapons and four different guns. Players earn silver and gold coins for slaying zombies and completing levels, and they are used to purchase new weapons and unlock new levels, respectively.

Reviews were mixed. But digital pirates certainly thought it was good, so good in fact, that the game was complete financial failure for the developer. As of January 1st, 2012, the game is available as freeware. Get it here.