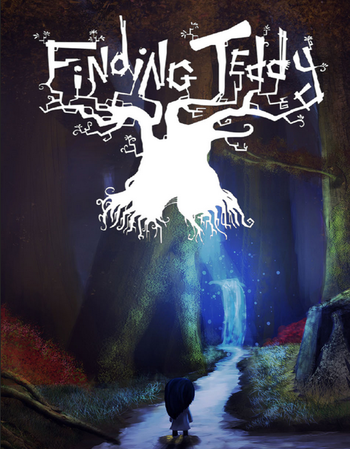 Finding Teddy is a Point-and-Click Adventure Game developed by Storybird, and released on February 8th, 2013 for iOS and on December 3, 2013 for PC through Steam.
Advertisement:

When a little girl's teddy bear is taken by a monster in her wardrobe, she gives chase, only to find herself in a strange and magical world. She must explore the land in order to reclaim Teddy, but even if she finds him, will she then be able to return back home?

A sequel called Finding Teddy II was released for PC on April 1st, 2015, but it was renamed Chronicles of Teddy: Harmony of Exidus when ported to PS4 and Wii U in March 2016. It is notable for undergoing a significant Genre Shift, turning from an adventure game with no way to attack to a Metroidvania where the slightly older protagonist now slays plenty of monsters and bosses with her sword and shield.

Tropes present in Chronicles of Teddy: