Film / He's Out There 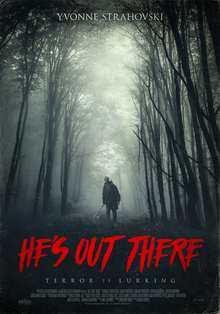 He's Out There is a 2018 Horror Film and Slasher Movie directed by Quinn Lasher, written by Mike Scannell, and starring Yvonne Strahovski, Anna Pniowsky, Abigail Pniowsky, Ryan McDonald, and Justin Bruening. Laura is headed down to the annual lake house vacation with her two young daughters, Kayla and Maddie, with her husband, Shawn, promising to show up that evening after business with an urgent client. Laura is helped with a recalcitrant gate lock by Owen, local resident and unofficial security for the area, who also mentions to her that her house used to be owned by another family, who left after their son, John, disappeared. Shortly after they arrive, Kayla and Maddie follow a trail of red yarn into the woods to find an unexpected surprise, and that evening, Laura and her daughters find themselves stalked by a murderous presence who seems motivated by family and the eerie story book that Kayla carries around about a mouse being pursued by the darkness...