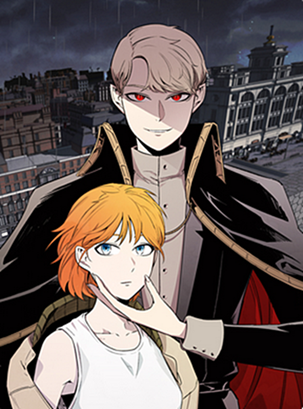 Hungry City/City of the Famished (배고픈 자들의 도시) is a Supernatural Action Comedy Korean Webtoon by Eucalyp and Hwi, originally published by Daum.

Jerome, a vampire, wakes up from a long sleep in the middle of a zombie apocalypse. Even though zombies pose no threat to him, their rotten blood isn't suited for drinking. Hungry and desperate to find living humans, he encounters Mina. To save her own life, she offers him a deal: in exchange for protection, she will lead him to a safe zone full of other survivors.