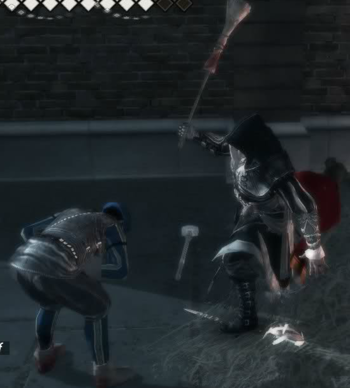 "Spring Cleaning"
All right, you primitive screwheads, listen up. See this? This... is my broomstick!

So our hero's weaponless and about to face a horde of mooks. He looks around for anything that he can use in a pinch. He grabs the only thing available — a mop from the supply closet — and goes to town, using it as one would a Simple Staff (or a bo).

Note that the title need not be taken literally. Anything vaguely cylindrical and tall as the character wielded as an Improvised Weapon falls under this; broomsticks and mop handles are simply the most iconic. Theoretically, this can be Truth in Television.

Sub-Trope of Improvised Weapon. Removing the head, or simply attacking with the handle whenever it's a better weapon than the other end of the object, is optional based on the Sliding Scale of Seriousness Versus Silliness.