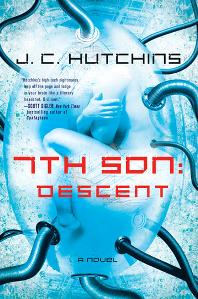 7th Son is a trilogy of science fiction techno-thriller novels written by J.C. Hutchins. They are, in order: Book One: Descent, Book Two: Deceit and Book Three: Destruction. The novels were originally released as podiobooks — free serialised audio books —over the course of 2006 and 2007 to critical acclaim and record download numbers. In 2008, Hutchins oversaw 7th Son: Obsidian, an anthology of short stories set in the 7th Son universe and written by other noteworthy podiobook authors. In 2009, Descent was picked up for publication by St. Martin's Press and released in late October. A short anthology of prequel stories entitled 7th Son: 7 Days was released in October, preceding the release of the Descent print edition. Hutchins also recorded a new podcast of Descent that reflects the edits made between the original podcast and the print edition.

Descent begins with the assassination of U.S. President Hank 'Gator' Griffin by Jessie Fowler, a four-year-old boy. Weeks later, seven strangers from across the United States are abducted by government agents. John is a struggling musician; Dr. Mike is a criminal profiler who hunts serial killers; Jack is a renowned geneticist; Michael is a captain in the Marine Corps; Jay ("Jonathan" in the original version) works for the United Nations; Fr. Thomas is a priest well-known for his youth aid efforts; and Kilroy 2.0 is a psychotic computer hacker with a cult of online followers.

At the secret underground headquarters of the 7th Son Project, under the command of General Hill and Dr. Kleinman, these seven men meet for the first time. Yet, they all look identical. They have the exact same memories of growing up an only child until being orphaned at age 13. They are all named John Michael Smith. These seven men are the product of the 7th Son experiment: they are clones, rapidly grown in pods to physical adolescence, uploaded with the exact same childhood memories and steered towards different career paths.

The so-called Beta Clones have been assembled because the prime suspect in the President's assassination is the man they were cloned from, John Alpha. Once believed to have committed suicide, John Alpha is now running free in the world. He is capable of reproducing 7th Son's advanced cloning and memory manipulation technology and has an endgame no one can predict—except, possibly, the Betas.

No relation to the movie with the same title, which is based on an entirely different book series.

J.C. Hutchins himself provides examples of: