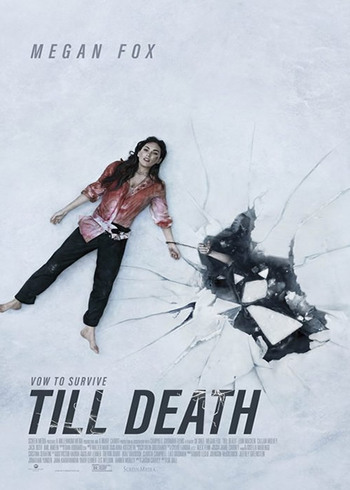 "I was dragging around that lifeless corpse of yours long before you put a bullet in that deranged head of yours."
"I'm gonna cut myself free of you, if it's the last thing I do."
— Emma
Advertisement:

Emma (Fox) is a housewife, trapped in an unhappy marriage with her overly controlling husband Mark (Macken). On the day of their tenth wedding anniversary, Mark gifts her a surprise trip to their lake house and a romantic evening, promising her that he will do better and try what he can to save their marriage.

However, after they spend the night together, Emma finds herself handcuffed to Mark the next morning. Mark shoots himself in the head right in front of her, leaving Emma bound to his corpse and stranded in the middle of nowhere.

Not related to the American sitcom 'Til Death.

Till Death contains examples of: