Film / The Phantom of Paris 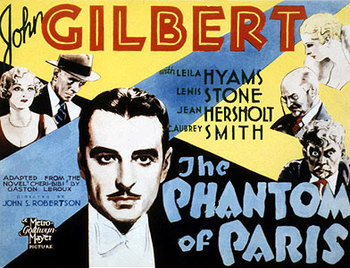 The Phantom of Paris is a 1931 film directed by John S. Robertson, starring John Gilbert.

Gilbert plays Cheri-Bibi, a magician specializing in escape artist tricks. He is infatuated with Cecile, the upper-class daughter of M. Bourrelier, and she with him. Bourrelier is appalled at the thought of his high-born daughter marrying someone as common as a stage magician. Cecile is actually engaged to be married to a much more socially suitable husband, the Marquis du Touchais. However, it turns out that the Marquis has some secrets: first that he's got a mistress named Vera, and second, that he's a fortune hunter and cad.

Bourrelier refuses to let his daughter marry Cheri-Bibi, but when he finds out about Touchais' checkered past, he nixes that match too. Unfortunately for Bourrelier he doesn't tell anyone else about this before confronting Touchais. An enraged Touchais then murders him. Police inspector Couchaud, who doesn't particularly like Cheri-Bibi, makes some honest mistakes and pins the murder on him. Cheri-Bibi goes to prison under sentence of death, but escapes, and eventually sets out to clear his name.