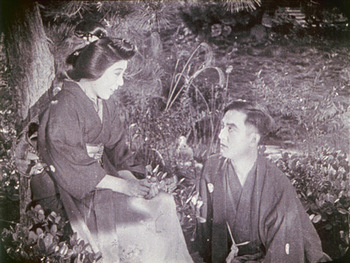 The Dragon Painter is a 1919 film directed by William Worthington, produced by and starring Sessue Hayakawa, and also starring Hayakawa's wife, Tsuru Aoki.

Tatsu (Hayakawa) is a talented artist who also happens to be mentally deranged. He lives in the hills around his Japanese village, convinced that he has spent the last thousand years searching for his fiancée, a princess who was captured by an evil spirit and turned into a dragon. Tatsu makes drawing after drawing of dragons as he searches fruitlessly for his imaginary princess.

One of those drawings happens to make its way to a surveyor who is a friend of the great artist Kano Indara. Indara has no son, and is thus looking for an heir and protege. Indara lures Tatsu to his home with the promise of the imaginary princess, but instead gives Tatsu his daughter, Ume-ko. This works quite well, as Tatsu accepts Ume-ko and her love cures his mania. But his art suffers.