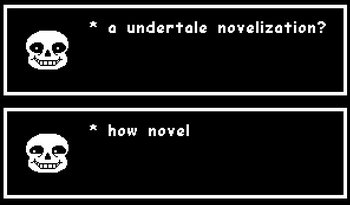 "But nobody came."
— Undertale

, (both the video game and fanfic)
Advertisement:

Hundreds of years later, the war with the Monsters is nothing more than a few pages in a history book. It is unknown where the Monsters were sealed away exactly, but guess who finds it? The story follows the events of the game closely, and despite it having to adapt into an entirely different medium, the game mechanics still can be seen within the story wherever you look.

Undertale is an Undertale fanfic written by Picachuyou

and was released on Oct 12, 2015 on the site FanFiction.Net. The fanfic follows a female Frisk through the Underground and retells the events in the video game while adding extra scenes and characterization to both Frisk and the characters in the underground.