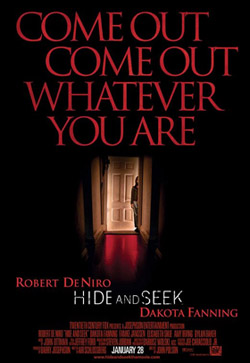 Hide and Seek is a 2005 Psychological Horror film directed by John Polson, starring Robert De Niro and a then relatively-unknown Dakota Fanning.

This film is about a psychiatrist named David Callaway (De Niro), who moves to upstate New York with his daughter Emily (Fanning) following the suicide of her mother (Amy Irving). While settling into their new home, Emily begins conversing with an imaginary friend named Charlie, while at the same time becoming close to Laura (Melissa Leo) and Steven (Robert John Burke), a neighboring couple who lost their own daughter to cancer.

Emily's irrational behavior starts to worry David, and things come to a head when a woman he has befriended named Elizabeth (Elisabeth Shue) is killed while she is playing with Emily. Emily blames the murder on Charlie. David confronts his neighbor, believing him to be "Charlie", and drives him away... only to be immediately confronted with the real Charlie, his own psychotic alternate personality.