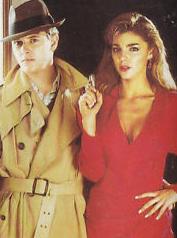 High Stakes is a 1986 Black Comedy in the style of a Noir detective story, shot on location in Vancouver, Canada.

The story is told by our hero, Bo Baker (played by Dave Foley in his film debut) - a gawky, endlessly optimistic day-dreamer who sees himself as the star in his very own Film Noir story. Abandoned by his parents, Bo is raised by his abusive uncle, who bitterly gives Bo a job at his news station. This is not out of nepotism, but merely so Uncle Bill can have somebody to kick around when he's not popping pills or drinking.

Bo sneaks into an illegal casino with a camera, hoping for the scoop that will lead to the stardom he experiences in his many fantasies. He gets caught and winds up dodging bullets from The Mafia. With leads to a hidden stash of Nazi Gold on the nearby Von Reich estate, Bo risks his life to find the story. He's aided by the Mafia Princess Terry and journalist Eric Roberts, who has recently gone missing.

The action is interspersed with Bo's Deliberately Monochrome Fantasy Sequences, in which he is the star ace reporter, with all the power, all the influence and all the know-how. Complete with the Private Eye Monologue, Nice Hat and Badass Longcoat.

It is not an easy movie to find, given its common title, Foley himself seeing the movie as an Old Shame, and having not seen a full release since its VHS issue by the long-defunct Cinema Group. Even its sparse IMDB page mistakenly describes Bo working at his uncle's "detective agency", instead of news station.