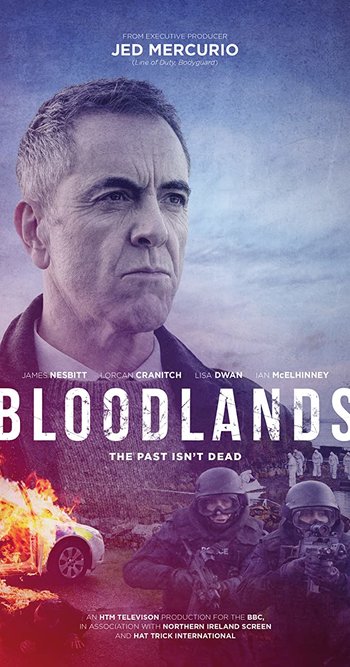 The past will catch up to you.
Advertisement:

Bloodlands is a British TV drama produced by HTM Television and aired on BBC One. The first episode aired throughout the UK on February 21, 2021. In North America and other terriories, Acorn is the licensed distributor of the show. Chris Brandon is the creator of the show while it's directed by Pete Travis and Jed Mercutio served as the executive producer. It stars James Nesbitt, Charlene McKenna, Lorcan Cranitch, Peter Ballance and Lisa Dwan. It's scheduled to have a second season.

Detective Chief Inspector Tom Brannick and Detective Sergeant Niamh McGovern of the Police Service of Northern Ireland (PSNI) are tasked on work on a case involving a missing person when a SUV is fished out of the waters of County Down. The PSNI learns that the victim is ex-PIRA leader turned businessman Pat Keenan, who was supposedly kidnapped by a covert assassin named Goliath. Tom, along with a few officers in the former Royal Ulster Contabulary, were secretly told that Goliath may be a Killer Cop working for the powers that may be against the Good Friday Agreement after it became official in 1998, kidnapping people who were known to be active in the Troubles.

Among those alledgly kidapped or killed by Goliath included Tom's wife, Emma, who was involved in intelligence operations in the British Army.