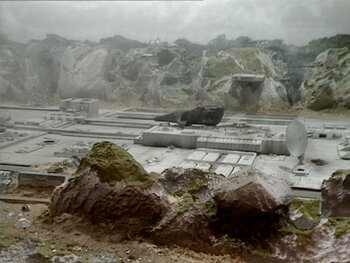 We should not go to Sardos, for it is a very silly place.
Written by Ben Steed.
Directed by Vere Lorrimer.
Airdate: 17 March 1980.
Advertisement:

The Liberator follows Servalan's starcruiser, which has broken away from her fleet on a mission to the hidden planet of Sardos. Servalan is seeking the remnants of the missing Fifth Legion, who hold sway over the inhabitants with the aid of a mysterious computer called Moloch.