"Making a movie is like getting on a stagecoach. At first, you're hoping for a pleasant journey. After a while, you're just hoping you get there." 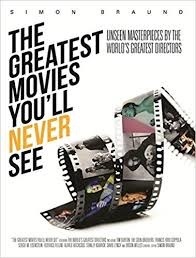 —Steven Spielberg, quoted in the introduction

The Greatest Movies You'll Never See: Unseen Masterpieces by the World's Greatest Directors is a 2013 book by Simon Braund about movies that were either never released, never completed or in numerous cases never even started, and what went wrong.