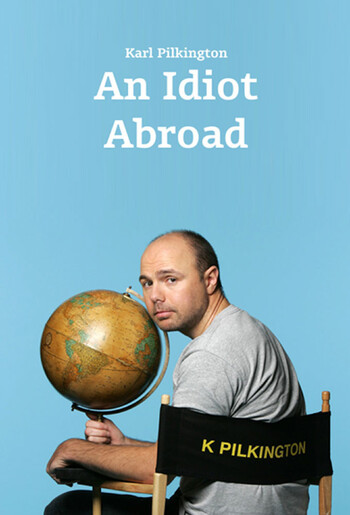 "We're not having 'An Idiot Abroad!' It's 'Karl Pilkington's Seven Wonders.' I've been through a load of shit here - you're sat there giving them bloody shit titles."
— Karl
“There's nothing funnier than Karl in a corner, being poked by a stick. I am that stick.”
—Ricky Gervais
Advertisement:

An Idiot Abroad is a travel series starring Karl Pilkington (and to a lesser extent his "friends" Stephen Merchant and Ricky Gervais). It initially aired on Sky1 in the UK from 23rd September to 11th November 2010 and started airing in January 2011 in North America on Discovery's Science Channel. It was advertised as "a social experiment gone horribly wrong". Supposedly, Karl was told that the show would be called Karl Pilkington's Seven Wonders and only found out that the name was going to be changed when he was in Peru.

The working title for the first season was "Karl Pilkington's Seven Wonders", and involved Karl traveling to the seven wonders of the world - The Great Wall of China ("It goes on for miles, but so does the M6"), Christ the Redeemer in Brazil ("It's like a big pylon"), Macchu Picchu in Peru (he never made it), Chichen Itza in Mexico, the Taj Mahal in India, Petra in Jordan, and the Great Pyramids in Egypt ("It’s like a game of Jenga that’s got out of hand").

The second season debuted in September 2011 on Sky One and January 2012 on The Science Channel. This time the format called for Karl to achieve a series of "bucket list" items culled from a survey of things people would like to do before they die. It featured, among other things, Karl spending a night on his own desert island, Karl riding the Trans-Siberian Express, Karl Whale-Watching in Alaska, Karl traveling down Route 66 and Karl climbing Mount Fuji.

A third series began airing in November 2012, with Karl assigned the task of replicating Marco Polo's historic journey. In response to Karl's insistence he be given someone to tag along (Ricky is who he had in mind), Gervais provided him with Harry Potter and Star Wars star Warwick Davis. This edition was shorter, only three episode with a fourth episode of wrap-up (the previous two seasons were seven episodes with an eighth wrap-up episode).

The main attraction of the show isn't seeing the sights, it's Karl's unusual philosophy and outlook on life.