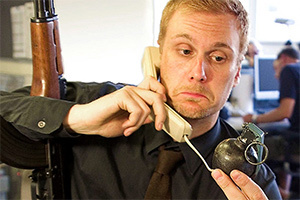 Simon is an electronic musician who is deeply unhappy - because his music career isn't developing, he has to work in an arms dealing company, and is too lazy to quit and find a more satisfying job. He's accompanied by his co-worker friend Boris, girlfriend Anna, and International Aid Worker sister Judith.