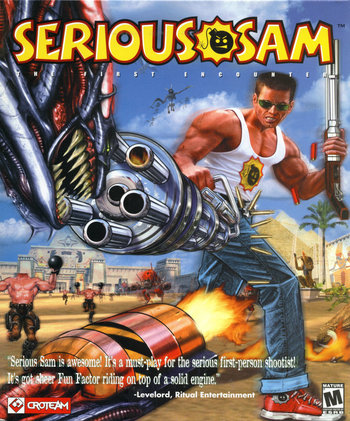 Click here to see the cover of the HD version 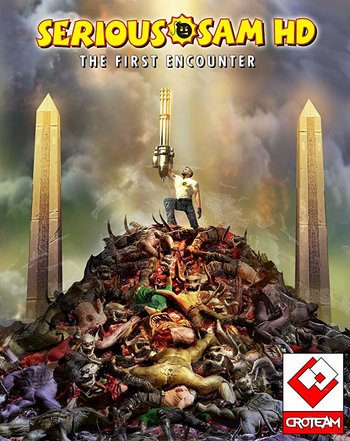 Serious Sam: The First Encounter is the first installment in the Serious Sam series. It's a First-Person Shooter developed by Croteam and published by Gathering of Developers for Microsoft Windows on March 21, 2001.

In days long past, the alien race known as the Sirians did battle with the alien overlord "Mental". Although many Sirians were killed, Mental was repelled.

In the 22nd century, Mental has returned, bringing with him a vast army that spacefaring Humanity fails to beat back. With Mental's forces pressing onto Earth, the decision is made to send a single elite back in time via rediscovered Sirian time-travel technology known as the "Time Lock" and defeat Mental in the past, thereby changing history in Humanity's favour. Sam "Serious" Stone is the (un)lucky man. Armed with only a head-implanted AI and a self-replenishing revolver, Serious Sam battles through ancient Egypt in order to save the universe from the impending threat.

Originally a Tech Demo Game created to promote the Serious Engine, the game was praised for being a well-made throwback to old-school shooters where the emphasis is on massacring enemy hordes instead of dueling small, smart squads. And when we say hordes, we mean hordes, especially in those nice open expanses where you truly get to appreciate how much opposition Sam's up against - and, consequently, how much of a badass he is.

The game had releases for Palm OS (developed by InterActive Vision and released by Global Star Software on November 12, 2001) as well as a Croteam-developed version for Xbox published by Gotham Games on November 12, 2002. In November 2009, Croteam released an HD remake called Serious Sam HD: The First Encounter. It features enhanced graphics, ragdoll physics, and various minor tweaks, but the gameplay is otherwise unchanged. Around the same time, the original was also released on Steam as Serious Sam Classic: The First Encounter, given as a bonus for getting the HD remake's "Gold Edition". In 2017 the game was remade for Virtual Reality as Serious Sam VR: The First Encounter; the game itself being based on the HD release.

Now I have some serious tropepower!

How the heck do they scream anyways? They don't even have heads!

How the heck do they scream anyways? They don't even have heads!