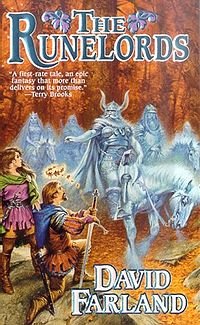 Learn to love the greedy as well as the generous. Love the poor as much as the rich. Love the evil man as ardently as the good. And inasmuch as is possible in this life, when you are beset upon, return a blessing for every blow.
— Words of the Earth King and creed of House Orden
Advertisement:

David Farland's fantasy epic, pitting man against man, man against monster, and wizard against wizard. Currently the fourth book of a second quadrilogy is in progress.

In the world of the Runelords, mankind has long used the study of runelore to create forcibles, magical branding irons used to transfer endowments of attributes such as strength, stamina, speed, wit, grace, or sight from one man to another. The magic of the Endowments is such that a person can receive an unlimited number, but can only ever give one, once in their life. But once it's given, it's truly given away, not shared, so one who gives his strength becomes too weak to stand, one who gives his sight is struck blind, and one who gives beauty becomes hideous. Runelore has allowed for the creation of soldiers far above what any normal man could ever hope to achieve. Runelords, those lords who have been freely given endowments by their people, are charged to use their abilities in the defense of their people, and the men who gave endowments, called Dedicates, who often can no longer care for themselves. The bond lasts until either the lord or the Dedicate dies.

An endowment can only be given willingly, with "willing" meaning "consenting to the act in the moment it's performed." Unfortunately, not all men are good and virtuous lords, and there are plenty of less-than-ethical ways to obtain that momentary consent, ranging from buying it with gold to beguiling commoners unused to dealing with Runelords with your greatly-enhanced beauty and voice, to taking hostages and demanding an endowment from their loved ones in return for their safety.

The practice of taking a person's attributes for your own is sometimes thought of as inherently evil, and often as a necessary evil (if your enemies have runelords in their armies, you need some of your own or you'd be defenseless against them.) This raises all sorts of fascinating moral questions and dilemmas, and the author doesn't shy away from them.

The first series focuses on the story of Gaborn Val Orden, the prince of Mystarria, wealthiest of the northen countries. A young prince with few endowments to his name but a good, noble heart, he is chosen by the Spirit of the Earth as the Earth King, champion of the Earth Power, and tasked to choose 'a seed of mankind,' and protect that handful of people through the dark times to come.

Meanwhile, in the southern land of Indhopal, the rapacious Wolf Lord Raj Ahten has spent years accruing thousands upon thousands of endowments for himself any way he can, seeking to become the legendary Sum of All Men. His empire stretches across the continent, holding all of the formerly warring southern nations within his grasp, and his gaze is now set upon the north.

But human warlords are hardly the worst threat the world faces, and Raj Ahten could hardly have chosen a worse time to plunge humanity into a divisive, weakening war. From deep within the Underworld, the horrifying monsters called Reavers, ancient enemies of mankind, are beginning to pour out, led by their Scarlet Sorceresses, who have been studying the same Runelore that previously was the only weapon mankind had to defeat the Reavers. It's they, not Raj Ahten, that the Earth Spirit wants Gaborn to protect humankind against, with a warning that just like the ancient Duskin and Toth races have passed into extinction, humankind's time may be up too...

Scions of the Earth

Takes place nine years after the conclusion of the first series, beginning with the death of Gaborn. As the world mourns, his widow, Queen Iome, realizes that their children are now in danger from the leaders of other nations, fearing they may intend to conquer, and from Gaborn's greatest enemy, the Locus called the One True Master of Evil. Following Gaborn's last commands, the queen, their two sons Jaz and Fallion, loyal bodyguard Borenson, and Borenson's wife, the water wizard Myrrima, make a run for it, running to the edge of the world and beyond. But Fallion is not just the son of the Earth King; he has latent powers of his own, and will need to learn to draw upon and control them in order to finish his father's work...