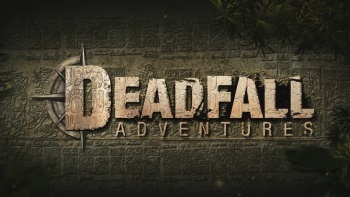 "A great name can be an even greater burden."
— James Lee Quatermain
Advertisement:

Deadfall Adventures is a 3D First-Person Shooter action-adventure by Polish developer The Farm 51 and published by Nordic Games in 2013, for PC and Xbox 360. The game is set just before World War II and follows James Lee Quatermain, great-grandson of Allan Quatermain (the hunter/adventurer created by H. Rider Haggard), who has been hired to seek out the "Heart of Atlantis", alongside US agent and former colleague Jennifer Goodwin, before the Nazis/Russians do.

The game combines modern first-person shooter combat with puzzle solving and treasure hunting. Deadfall Adventures is basically Two-Fist Tales: The Game, with elements reminiscent of Indiana Jones, The Mummy Trilogy, and a bit of Wolfenstein.