Literature / The Girl Next Door 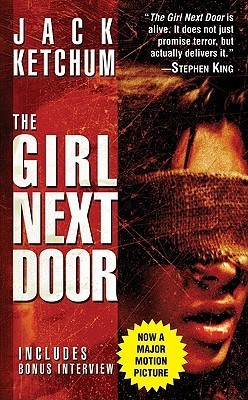 The Girl Next Door is a horror novel by Jack Ketchum (pen name of author Dallas Mayr), published in 1989. Brutal and disturbing, the plot is loosely based on the case of Sylvia Likens

, an Indiana teenager who was tortured and murdered in a basement.

For the past 50 years, David Moran has been haunted by the events of 1958, the year he fell in love with Meg Loughlin. Meg and her sister Susan came to live next door with their strange, reclusive, and unstable aunt Ruth and her three rambunctious sons. Everyone was in love with Meg, with her beauty, her gentleness, her tomboyish sense of fun. But Ruth resented the beautiful young girl under her roof. Slowly she began to turn first her own sons, then the neighborhood children, against Meg.

That summer, Ruth invented a new game. A secret game that could only be played in the basement. A game where Meg was the focus for all their sadistic fun. A game with only one rule: Never tell anyone.

But as the grim summer goes on, Meg starts to seem less and less human, and David can't bring himself to look away from the horror.

Not to be confused with the 2004 film by the same name.

The film and novel contain examples of: