There are characters in the Gradius series. However, few of them are enough information to be included in this page.

This part of the page covers the central heroes and the fighters from planet Gradius or its ally planets.
Fighters In General 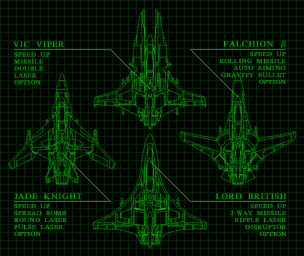 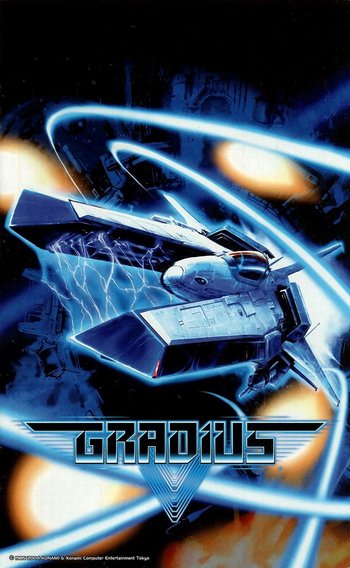 The Vic-Viper in the cover of Gradius V.
The heroic snake-themed starfighter of the series, designed by Dr. Venom (yes, that Venom) and first piloted by James Burton. The star fighter has battled the Bacterion forces for generations, keeping planet Gradius and the galaxy safe from their wrath. The Vic Viper is armed to the fangs with missiles, double machine guns, lasers, options, and a shield.
Lord British (Fighter) 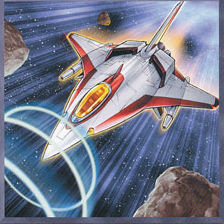 The Lord British portrayed in Yu-Gi-Oh!.
A state of the art star-fighter named after its pilot. This fighter is first introduced in Salamander (1986), where it serves as the second Player Character to battle the Salamander forces. Like the Vic Viper, the Lord British can be equipped with the Cyclone Laser or the Ripple Laser, the latter becoming the fighter's Weapon of Choice in other appearances.
Jade Knight 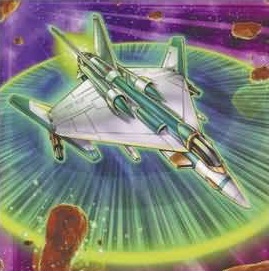 The Jade Knight portrayed in Yugioh.
A newcomer to the Gradius series, starting with Gaiden. This green star-fighter aids the other fighters to battle OVUM and its forces. Its weapons are designed for covering all angles and up-close combat, such as the Round Laser. The Jade Knight is also equipped with Spread Bombs and the Twin Laser, which can be upgraded for extra firepower.
Falchion Beta 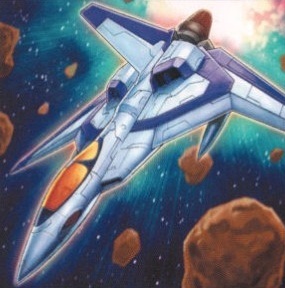 The Falchion Beta portrayed in Yugioh.
Another newcomer from Gaiden, joining the other fighters to battle OVUM and its forces. This purple-clad star-fighter is designed for dealing massive damage, thanks to its Auto-Aiming gun, which homes on enemies from above and behind, and the destructive Gravity Beam, which eats through bosses and enemies alike.
Metalion 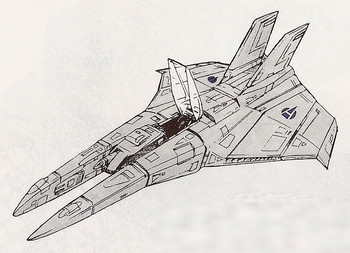 A sketch of the Metalion from Nemesis II.
This advanced star-fighter serves as the successor of the Vic Viper series. Just like the Vic Viper, the Metalion was also developed by Dr. Venom, but after Venom's coup was thwarted, the Metalion's development was delayed until the Space Agency's engineers finished its development, just in time for Venom's invasion. The fighter is piloted by James Burton, who takes on Dr. Venom and his forces in Nemesis II.
Advertisement:
James Burton

James Burton as he appears in Gradius Rebirth.
The hero of Gradius 1, Nemesis 2, Gradius Rebirth. He is a Wreekian, just like Dr. Venom. After defeating Venom in Nemesis 2, James becomes Emperor Lars 18th. He passes away in year 6718 at the age of 77, but that doesn't stop Dr. Venom from going to the past and kidnapping a three-year old James. Thank goodness David Burton, a descendant of James, saved the boy from Venom.
David Burton 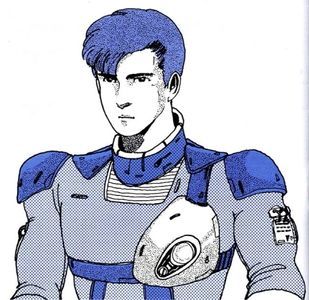 Voiced by: Kouji Tsutani (OVA)
One of the protagonists of the Salamander OVA series. Just like Eddie and Stephanie, Dan is one of the three Gradian pilots sent to help protect Planet Latis against the Salamander invasion in the first episode. In the second episode, Dan and Stephanie successfully stop the first Bacterian invasion by destroying the cyber brain inside of the Xaerous Fortress. In the third episode, Dan and Lord British rescue Stephanie from Paula and Gofer, and the heroes destroy the fused form of the latter two, bringing an end to the Bacterian wars.
Eddie Evans

Voiced by: Kazuhiko Inoue (OVA)
One of the protagonists of the Salamander OVA series. He gets manipulated by Paula, a Bacterian disguised as a human, into destroying the Bacterian repellent: the Moai Statue. Eddie redeems himself by sacrificing himself (by flying into the mouth dragon named Salamander) to save Gradius.
Stephanie McBain

Voiced by: Noriko Hidaka (OVA)
One of the Protagonists of the Salamander OVA series. In the second Salamander OVA, she had to destroy her own father (who was kidnapped and turned into a Cyber Brain by the Bacterians). In the third, she gets kidnapped by the Bacterians and almost got become a cyber brain just like her father, but gets saved in time by Dan and Lord British.
Advertisement:
Lord British (Character)

Voiced by: Hirotaka Suzuoki (OVA)
One of the Protagonists of the game Salamander and the Salamander OVA series. He is the ruler of planet Latis. His personality isn't very detailed in the games, but in the OVA series, he's a bit of a Jerkass.

The main villains of Gradius who come from the Star cluster of Bacterion. This page is just going to cover the important ones.
Bacterion 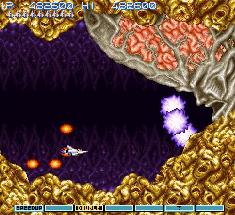 "I was born from the greediness of mankind. While men exist, so will I!"

Bacterion, the god of destruction. The creator of the entire Bacterian Empire, Bacterion always tries to invade Gradius, home of the Vic Viper, the ship that always defeats him.
Gofer 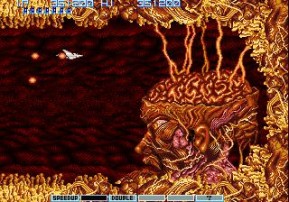 "I am the strongest!"
The Big Bad of Gradius II, Nemesis 3: The Eve of Destruction (MSX) and IV.
Life Force/Zelos

Life Force/Zelos (Not to be confused with the other Zelos) 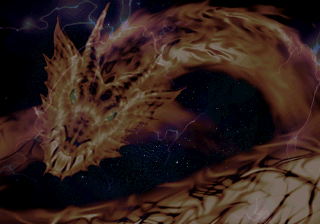 A Planet Eater that serves as the antagonist of Salamander, may or may not be a serpentine Draconic Abomination. Usually, you have to destroy it from the inside.
Zelos Force

This Bacterian is a red gigantic eye created as a Living Weapon by the forces of Bacterion to transform planet Latis, a neighboring planet, into Bacterian territory.

"Waah!"note The short yell that it makes in Gradius V and Salamander when defeated
Paula

Voiced by: Sumi Shimamoto (OVA)
A female Bacterian who is the Big Bad of the Salamander OVA series.
Big Core Series 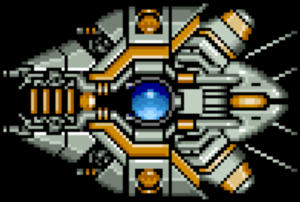 Big Core Mk.1 from Gradius I. 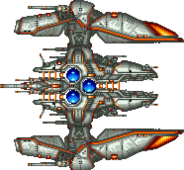 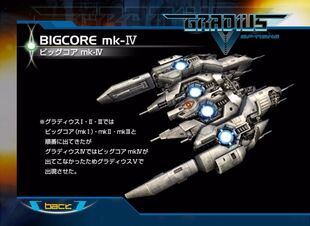 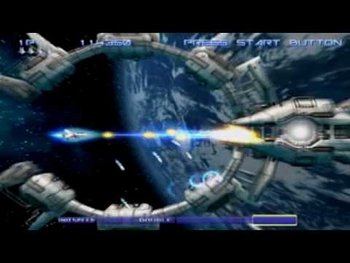 Big Core Rev 1.2 from Gradius V.
A series of large Bacterian Warships that mostly serve as the bosses of the Gradius series. So far, there are Big Cores MK I, II, III, IV, and many variants.
Dr. Venom

"You will never escape the shadow of fear! My hatred for your kind is eternal!"
The Big Bad of Nemesis 2, 3, Gradius ReBirth and V. He constantly tries to destroy Gradius for using his people, who became an endangered species thanks to a future version of Venom and Gofer, only for their ESP powers.
Doom

"I'm going to scare you like you've NEVER been scared before!" . 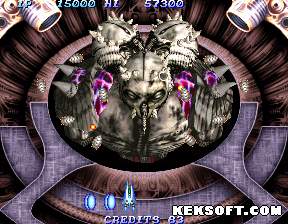 "I'll scare you like you've never been scared before!"

The Big Bad of Salamander 2. He was the most recent leader of the Salamander force, an elite Bacterian army that was previously led by Zelos Force and Venom. He only appeared in Salamander 2.

"I hope you can entertain me."

O.V.U.M, the main villain of Gradius Gaiden. It transforms into several entities that are fought in Salamander; three Intruders, Zelos Force, and Brain Golem before exploding.

This section covers enemies and bosses unrelated to the Bacterions.
Moais 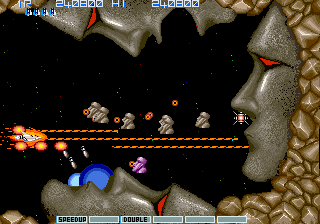 Big Moai from Gradius II.
Moais are recurring enemies and bosses that come in variable sizes throughout the Gradius series, first appearing in Gradius (1985). These stone creatures attack the Vic Viper with destructible laser rings that glow blue and red out of their mouths, which is also their weak point. Because of their distinct nature, the Moais more or less became one of the series' mascots other than the Vic Viper itself.
Fire Creatures 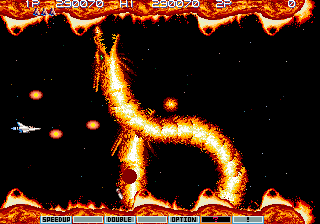 Vulture Dragon as it appears in Gradius III Arcade.
Fiery creatures that live in stars. Most of these creatures tend to be (serpentine) dragons, but they can also be phoenixes and lions.
Plants 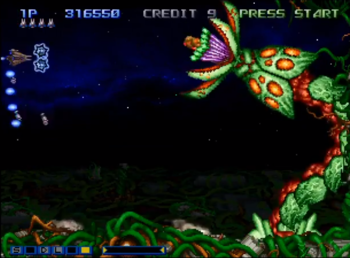