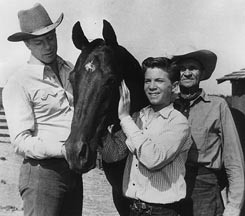 Jim, Fury, Joey and Pete
Fury is a Heroic Pet Story that aired on NBC between 1955 and 1960. The show followed the adventures of Joey (Bobby Diamond),his adoptive father Jim Newton (Peter Graves), and his semi-wild stallion, the titular Fury. They are often joined by Jim's partner Pete and Joey's friends Pee Wee (seasons 1-3) and Packy (seasons 4-5).

Often considered a western (despite being set in the 1950s), many of the series plots revolved around rustlers, bank robbers and swindlers. Other episodes dealt with issues specific to children, particularly boys, of the time. 4 H club, Junior Achievement, Boy (and Girl) Scouts, and Civil Defense groups all made appearances during the shows run. within the narrative, characters also spent time learning about hunting and gun safety, water safety, fire prevention and wildlife conservation.

The show was re-branded Brave Stallion in syndication.