This is the recap page for Infinity Train, an animated, science-fiction anthology series created by Owen Dennis that revolves around the numerous passengers and denizens aboard a mysterious, seemingly endless train in another dimension. The show ran on Cartoon Network from August 5th, 2019 to January 10th, 2020, and on HBO Max from August 13th, 2020 to April 15th, 2021.

Despite the show's anthology nature, the plots of later seasons still spoil reveals made in prior ones. As such, unmarked spoilers are present even in some of the synopses below. Read at your own risk.

"Infinity Train" (2016) - Tulip must learn to set her personal interests aside to make her way through a mysterious train and help the king of all corgis save his people.note Tropes for the pilot are listed under Book 1, Episode 3 below. 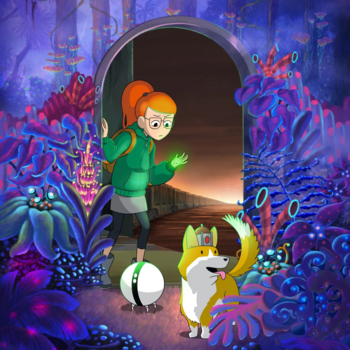 ♫ I'm going off the rails on a crazy train... ♫note From left to right: Tulip, One-One, and Atticus.
"There has to be a way off this train that won't kill me. Okay, everything has rules. E-E-Even crazy things have their own logic. It's a train, right? Trains have conductors. One-One, is there a conductor?"
— Tulip

A Minnesotan teenage girl named Tulip Olsen (Ashley Johnson) finds herself on an otherworldly train after running away from home. Resolving that the only means to escape back to Earth would be to confront the conductor, she begins journeying towards the engine of the impossibly long locomotive. Accompanying her on her quest is One-One (Jeremy Crutchley and Owen Dennis), a scatterbrained robot with a split personality who desires to find his "mother", and a talking corgi named Atticus (Ernie Hudson), a king who wishes to destroy a creature that had been terrorizing his kingdom. It ran on Cartoon Network over a five-night period, from August 5 to August 9, 2019. 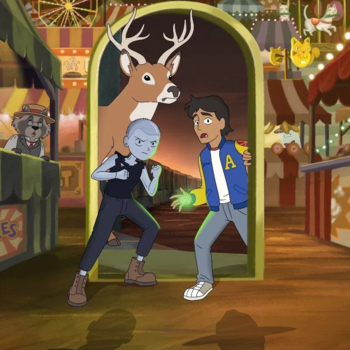 ♫ I am a passenger... and I ride and I ride... ♫note From left to right: Alan Dracula, MT, and Jesse.
"So, here's the only solution I can think of. I'll travel with you and help you get your number down. But only because then you'll get off the train and I'll get to stay with, for lack of a better name, Alan Dracula."
— MT

A few months after the events of Book 1, MT (Ashley Johnson) continues to evade the pair of reflection officers (Ben Mendelsohn and Bradley Whitford) tasked with her capture and execution. Following her most recent close call, she meets a shapeshifting deer-like entity named Alan Dracula, as well as an Arizonian teenage boy named Jesse (Robbie Daymond), who awoke on the train weeks prior. Though their personalities initially clash, MT and Jesse decide to help each achieve their goals of living freely and escaping the train, respectively. It ran on Cartoon Network over a five-night period from January 6 to January 10, 2020.

Book 3: Cult of the Conductor 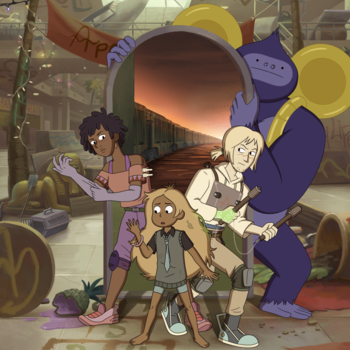 ♫ Don't be a worry-baby. No need to hurry, baby, when you're with me... ♫note From left to right: Grace, Hazel, Simon, and Tuba.
"Let's focus on numbers. We all have them. Me, you, and Simon. (...) Oh, I know. You could come back with us. That way we could teach you all about numbers. Maybe we can get yours to glow like mine does!"
— Grace

Grace (Kirby Howell-Baptiste) and Simon (Kyle McCarley) are the leaders of The Apex, a group of hedonistic child passengers who follow the alleged teachings of the "true Conductor." After the train unexpectedly shuffles the cars during a raiding mission, the two teenagers find themselves separated from the group and forced to trek their way back. On their return trip, they find themselves challenged by the unexpected appearance of Hazel (Isabella Abiera), a young passenger with a seemingly broken number who they wish to indoctrinate into their group, and her fiercely protective gorilla caretaker Tuba (Diane Delano). It ran on HBO Max over a three-week period from August 13 to August 27, 2020. 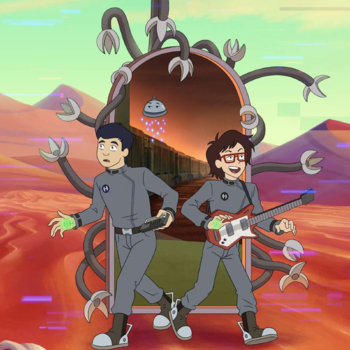 Living in British Columbia during the 1980s, Ryan (Sekai Murashige) and Min-Gi (Johnny Young) are two childhood friends who dream of becoming famous musicians. However, the duo finds their relationship becoming strained after graduating high school, and an argument over a sudden trip to New York ends with the duo boarding the train to the Wasteland instead. Waking up with matching numbers and stuck with the dubious companionship of a scatterbrained concierge bell named Kez (Minty Lewis), the duo must now figure out how to repair their bond or risk remaining on the train forever. The entire season premiered on HBO Max on April 15, 2021.

Taking place between Books 1 and 2, these are a series of two minute shorts starring One-One as they visit different cars on the train in order to create informational videos for future passengers. They premiered sporadically on Cartoon Network's YouTube page from October 19 to November 16, 2019.