Western Animation / Home on the Rails 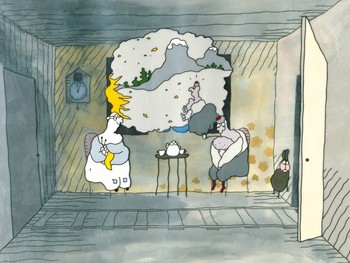 The realtor will have a hard time with this one.
Advertisement:

Home on the Rails is an odd little 1981 animated short film from The Netherlands, directed by Paul Driessen, in collaboration with a painter billed as "The Amazing Mr. Wonderful".

It isn't a cartoon about Hobos. No, it's about a married couple who literally have a house on the railroad tracks. Every day, when the clock strikes 12 and they hear the whistle, they have to open two doors to let the train pass. The husband supports the two of them by working as a gold prospector. When he can no longer pan for gold at his favorite site, due to an encroaching railroad, he faces a moment of crisis.