Western Animation / The Killing of an Egg 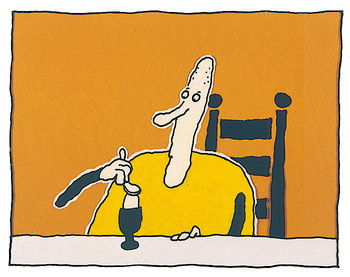 The Killing of an Egg is a 1977 animated short film (very short, about 2:50) made in The Netherlands by Paul Driessen.

A man wearing a yellow shirt, living in a house with yellow walls, sits down to eat a soft boiled egg. When the man taps on the egg with his spoon, he is surprised to hear a voice from inside the egg saying "Hey, who is it?" The man continues to tap on the egg as the voice inside continues to call out to him. The voice starts to protest as the man's increased tapping starts to crack the shell. Finally the man gets carried away and smashes the egg, killing whatever kind of tiny person was living inside. Then the man gets an unpleasant surprise.