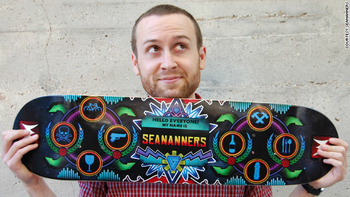 SeaNanners: Hey guys, I realise we're a little tense and some words have been thrown around and everybody is a little on edge, but rest assured I'm innocent and I will not harm you.
GassyMexican: ...See this is where I wish I could see your facecam that eventually goes up afterwards, 'cos you're probably making some stupid face.
— Adam and Max during a game

of Trouble in Terrorist Town. Where Adam is a traitor.
Advertisement:

, sometimes known as "The Banana Man," is a You-Tuber, formally a host of Machinima Respawn with Mr Sark and Hutch, starring in the series Hello, Everyone! My Name is SeaNanners. Nanners takes his five-million-plus YouTube subscribers on journeys through almost every manner of video game, from first-person shooters like Call of Duty: Black Ops to sandboxes like Minecraft, and nearly everything in between. He is known for his variety of videos, general friendliness, humour, occasionally discussing life and wisdom in his videos, limited wardrobe and generally being adept at most games he plays. His current format is to upload a highlights reel of his recent gaming session (usually in Garry's Mod), once a day. The people he plays with usually upload longer videos on their own channels that contain the bits in between.

From 2018 to 2020, SeaNanners suddenly went on hiatus for unknown reasons. When asked by a friend while they were playing together, he claimed that he, at least temporarily, had moved on from his Youtube career and was investing in real estate. (Source

In August 2020, Seananners made a sudden return

, discussing the reasons why he left and how he plans to make additional content going forward.