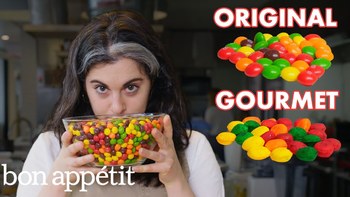 Hey everyone, I'm Claire. I'm in the BA test kitchen and today we are making gourmet...
Advertisement:

in which host Claire "Half-Sour" Saffitz attempts to recreate and elevate foods, particularly junk foods, to the point where they could be considered gourmet. Airing since July 2017, the series has accumulated over 135 million views.

As May 2020, Claire has decided to not continue her relationship with Condé Nast and has a new You Tube Channel, which you can watch here