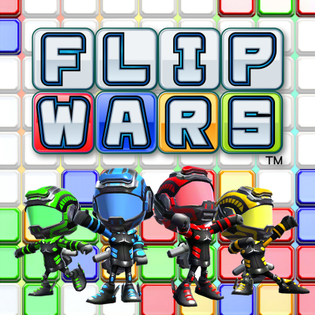 Flip Wars is an action Party Game, developed by Over Fence Co. Ltd and released for Nintendo Switch worldwide on July 6th, 2017.
Advertisement:

Four players can play locally or online, whereas they pick a colored avatar and use a Hip Drop and other moves to flip tiles on a giant board to the same color. The game includes multiple boards that each have different hazards and power-ups, thus requiring a different strategy. The game also has three modes. In Panel Battle, the winning player has the dominant color. In Knock-Out Battle, the player that knocks out other players the most frequently wins. Life Battle is an elimination mode where the last player standing without three knockouts wins.