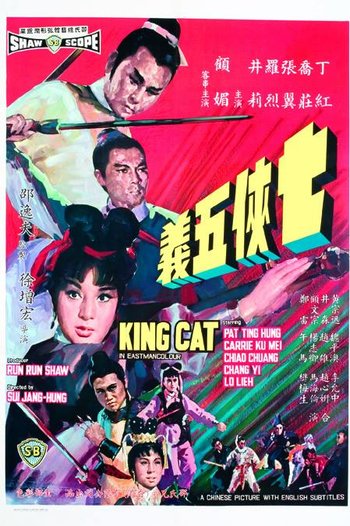 The cat, the rat, and the princess they need to save.

Based on the Song Dynasty novel, Seven Heroes and Five Gallants

(七侠五义), Chang Yi stars as the leading gallant, Zhan Zhao (展昭) a.k.a the titular King Cat, who is assigned to track down a band of thieves calling themselves the "Five Rats" led by Bai Yu-tang (白玉堂) a.k.a the "Brocade-Coated Rat", who is guilty of stealing a load of imperial treasure. But they have to put their differences aside to rescue a princess from the ruthless, dangerous murderer, Hua Chong the Variegated Butterfly (Lo Lieh), who is keeping her captive in a monastery full of corrupt monks.