Here are the characters from Shadowverse. Beware of unmarked spoilers. 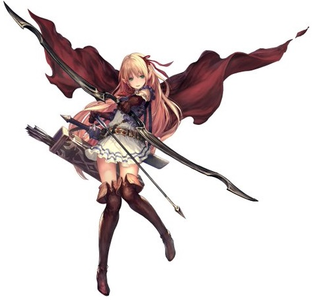 Arisa is a young girl being trained as a guardian of the forest. One day, her friend, Losaria, was kidnapped by mysterious shades, and is set off to find her friend. Her deck specializes in combos and deploying cheap, low-cost cards into the battlefield. 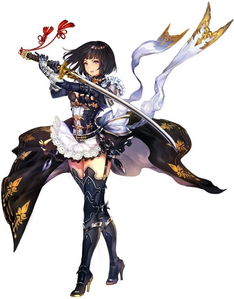 Erika is one of the loyal guards to the princess. She sent to Urias's mausoleum to investigate the shades that attacked the princess. Her deck specializes in deploying officers and commanders into the battlefield and encourage aggressive plays. 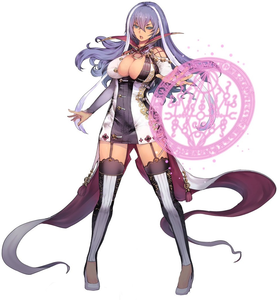 An alchemist who wishes to revive her fiance, Kyle, after he was killed by a dragon. Her cards can be divided into two archetypes - Spellboost involves cards that grow stronger or more efficient as the player casts spells, while Earth Rite requires manipulation of special Earth Sigil amulets to unlock stronger effects of her cards. 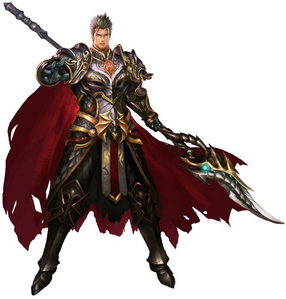 A commander of the royal army. He is the Lone Survivor of his squad that was attacked by a dragon. His deck specializes in Overflow, where his cards have an additional effect when active. 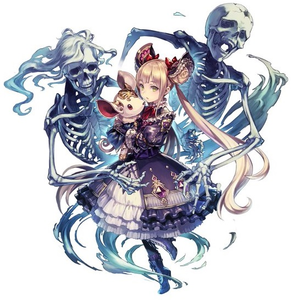 A troubled, young girl living alone in a dark mansion with her ghost parents. She one day sets off outside the mansion on an adventure to find new friends. Her deck specializes in Necromancy, where she accumulate "Shadows" through the death of her followers, which can be used as an additional effect for her cards. 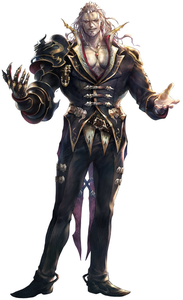 A vampire awakened from his slumber. After finding out his Worthy Opponent, Balthazar, passed away a long time ago, he sets off in a journey to find another. His deck specializes in Vengeance, a Critical Status Buff that activates when at 50% health or below (10 health or below). 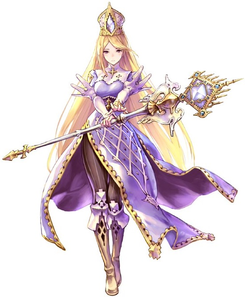 A priestess with amnesia. She wishes to ease the suffering of others. Her deck specializes in Countdown, where she indirectly summons followers with amulets and amulets with a timer.

A mysterious dimension traveler and a new character introduced in the Chronogenesis expansion. He has arrived just as the world is being destroyed by Nexus, and is driven by his scar to find and defeat her.

His cards specialize in Resonance and Artifacts where the former has an ability activated when the number of cards in the deck is even while Artifacts are tokens generated that can be added or removed from either the hand or the deck.

Arisa's best friend and training companion. During the tutorial, the player controls her as the game walks them through its basic mechanics.

The current ruler of the capital.

The old ruler of the kingdom of Aleister who managed to match Urias in the past.

A greater being who emerges from the Morning Star at Chapter 8 of each of the characters' story arcs, before proceeding to suck them into the light beyond.

Isabelle's fiance and one of Rowen's soldiers. He had been slain by a dragon while defending the capital.

A dragon attacking the capital during Rowen's flashbacks. In its dying throes it placed a curse on Rowen, causing him to transform into a dragon when his desire to protect is at its strongest.

The Keeper of Purgation that destroyed Yuwan's homeworld and left him with his scar.
Isunia (Guild Wars chapter)

A guild of knights in Isunia, dedicated to upholding the peace of the land.

Undermarshal of the Order of Bladerights. She is acting as the Order's temporary marshal while their leader is recovering from injury.

A member of the Order of Bladerights, who recruited Maisha into the guild.

A guild comprised of mages who conduct research in pursuit of greater knowledge.

Marshal of the Magis Covenant.

Formerly a branch of the Order of Bladerights, the Countersolari are comprised of assassins and seek to destroy the current societal order.

The marshal of Countersolari, and an assassin who aims to wage war against the Bladerights.

The lawmakers of Isunia, who work to maintain order in the land.

Marshal of the Eschamali, who has taken upon himself to look after Nicola Adel.

The fifth guild of Isunia, comprised of one member who shares its name. Nicola Adel is a mysterious but incredibly powerful figure seen wandering the streets of Isunia.
Aiolon (Gears of Rebellion chapter)

A former researcher of Aiolon who was granted immense power, letting him usurp leadership of Aiolon. He has since created almost all the machinery within the realm and uses it to exert his control.

The fourth of the robotic sisters, Tetra appears at the very end of the Guild Wars arc to set the stage for the transition to Aiolon. With her interdimensional travel functions she transports the cast into Aiolon, enlisting their help in her rebellion against Belphomet.

ID-N3744, series 9. Aenea has the capability of bringing life to machines, but uses this power only to create new playmates. Discarded by Belphomet from the get-go, she was rescued from destruction by her "sisters" Mono and Tetra, and takes refuge in a scrapyard below the city.

The first of the robotic sisters, with the Alpha Drive that lets her battle at much higher power and speed.

Megaera, Alecto, and Tisiphone — these three are colossal war machines created by Belphomet, reforged from the unseen six robot sisters. They have no free will and know only of their destructive directives.
Naterra (Seeds of Conflict chapter)
The residents of Naterra were once one people, but the crisis of the blight encroaching on the forest split it into two warring factions.

The Sköll are the half of the Naterra population that remain loyal to the throne. They seek peace with the forest and Viridia Magna, resigning themselves to the fate their god chooses to give them.

The leader of the Sköll, and heir to the throne.

Half the residents of Naterra became the Mánagarmr, a group of radicals seeking to overthrow Bayleon and destroy Viridia Magna.

The leader of the Mánagarmr, and the Forest Shadow. He's Valdain's estranged half-brother, and became what he is today after ingesting a potion that granted him his powers. In truth, he is of no blood relations to the throne — his true father is a dragon, the Forest Terror, and he and his mother were adopted into the royal family by the king of Naterra. His cursed power stems from his draconic lineage.

The god that created the world of Naterra. She has begun to spread a corruption across the forest, setting in motion the crisis that split its residents into two warring factions. It is said that she has destroyed and remade the world multiple times in the past.
Other Leaders

The protagonist of the anime. He's been wanting to get started on the game but hasn't been able to without a smartphone. All this changes when he discovers one in his home's storage shed. He plays Dragoncraft, and his signature card is Ignis Dragon.

One of Hiiro's and Kazuki's classmates. She plays Forestcraft, and her signature card is Brilliant Fairy.

An aloof player who's incredibly good at the game. His victories are demoralizing; everyone who's lost to him quit the game. He plays Bloodcraft, and his signature card is Dark Emperor.

A bespectacled underclassman who prides himself as a "super genius" Shadowverse player. He plays Runecraft, and his signature card is Chrono Witch.

A Havencraft player with a mysterious past. He is first seen at the semifinals of the Genesis tournament. His signature card is God of Curses.

A professional player who's an alumnus of Luca's school. He plays Runecraft, focusing on Earth Rite unlike Kai. His signature cards are Great Magician and Predator Golem.

A Grand Master Rank Havencraft player from the Genesis Corporation. He appears to help Hiiro complete his grind to Master for the National Tournament. His signature card is Sacred Lion.