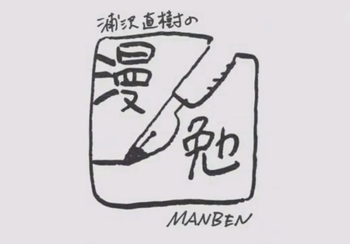 Urasawa Naoki no Manben (Naoki Urasawa's Manga Exertions) is a TV Documentary airing on NHK Educational TV. It follows acclaimed mangaka Naoki Urasawa (creator of 20th Century Boys and Monster) as he sets out to break new ground for manga even further than he already has.
Advertisement:

In an attempt to educate viewers about manga and preserve the intricate craftsmanship and process of Japanese artists on video for future generations, he invites a manga artist to have their workplace filmed for a couple of days, so as to display them in the process of crafting chapters for their current serializations. The cameras are fixed and specifically placed so as to be as unobtrusive as possible, letting the artists work comfortably. After the footage has been shot, Urasawa meets with the artist and they discuss the footage, talking about the artist's workplace and workflow, the difficulties involved in the mangaka lifestyle, their reasons for drawing manga in the first place, and their perspective on the current industry and their own work.

It initially began as a one-off special, featuring Urasawa himself working on his current title Billy Bat, and then following up with Kaiji Kawaguchi (Zipang) and Kazumi Yamashita (The Life of Genius Professor Yanagizawa). It was then spun off into a full series, with the first season featuring Akiko Higashimura (Princess Jellyfish), Kazuhiro Fujita (Ushio and Tora, Karakuri Circus), Inio Asano (Goodnight Punpun), and Takao Saito (Golgo 13).

A second season was greenlit for March 2016, featuring Moto Hagio (The Heart of Thomas), Kengo Hanazawa (I Am a Hero), Daisuke Igarashi (Children of the Sea), and Usamaru Furuya (Short Cuts).