Anime / Intrigue in the Bakumatsu 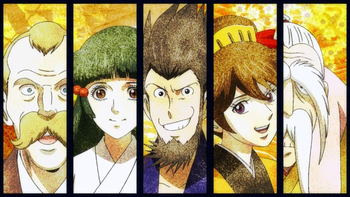 Intrigue in the Bakumatsu (Bakumatsu Gijinden Roman note 幕末義人伝 浪漫?) is a Japanese anime television series created by TMS Entertainment, based on the CR Ginroku Gijinden Roman pachinko game, with original character designs by Lupin III creator Monkey Punch. In the fantasy historical story, the main character is a "helper" named Manjirou by day and a phantom thief "retriever" named Roman by night. Roman steals back people's precious items that were unfairly taken from them.