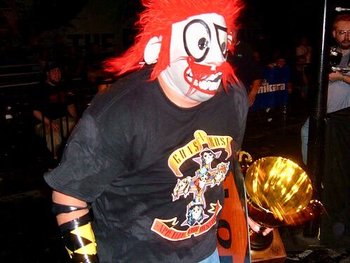 Shane Storm is an American Professional Wrestler from Wilkes-Barre, Pennsylvania best known for his work in CHIKARA. He debuted in 2004 and won the Young Lions Cup the following year. At The Sordid Perils of Everyday Existence on November 17, 2007, he defeated Hydra of UltraMantis Black's The Order of the Neo-Solar Temple when Hydra essentially sacrificed himself, ending Storm's losing streak. That same night, Chris Hero defeated Equinox (Vin Gerard) in a Mask vs. Hair match by breaking the CHIKARA Special and making Equinox tap out to the same move. It would slowly be revealed that Storm was the one who sold out the tecnicos by giving the counter to Mantis who gave it to Hero. This led to Storm turning rudo in September and becoming STIGMA and forming The UnStable with Gerard, later adding Colin Delaney. The group fell apart over 2010-2011. This ultimately led to the debut of Die Bruderschaft des Kreuzes at the end of the 2009 Season Finale Three-Fisted Tales on November 22, 2009.

Along with his YLC win, he and Bo Nekoda held the GSW (New Jersey) Tag Team Titles

as BoStorm, and he, Mike Quackenbush and Jigsaw won the inaugural King of Trios tournament in 2007.

He has no connection to Devon Storm, James Storm, Lance Storm or Toni Storm.