Roleplay / The Light of Our Solus 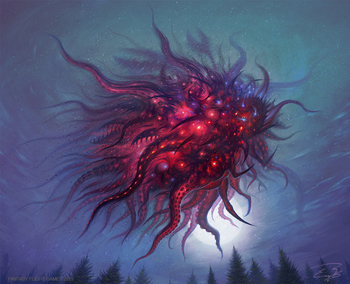 Don't worry. He's friendlier than he looks.
“Life, it can be such a wonderful and terrible thing. Some would give anything to keep it, yet some feel nothing as they take it away.
In this world we call Remnant, life delivers us all to the same end. In this world that you will soon to be born into, how will you live?
Who will YOU be?”
— Opening Line
“A new being, something not seen before. Will this world accept you? Will you accept it? You are the first to appear and hopefully the last.”
— Mordin's Character Description
Advertisement:

The Light of Our Solus (previously known as Random Guy Quest) is a RWBY based quest hosted on SpaceBattles.com, though it features a large cast of original characters and plays around with the show's canon while adding in new plotlines. It stars Mordin Solus, a recently born Eldritch Abomination who has spent thousands of years sleeping beneath the planet, waiting to be born. Taking the form of a wolf/fox faunus, Mordin lives out his life among the people of Remnant, training to become a hunter for no other reason than it seemed interesting at the time.

Accompanying him throughout his life are his sapient pet cat Blake, a robot named Talitha, former assassin Hesperides, his partial clone Osmond, and his teammates Ruby Rose, Blake Belladonna, and Felicia Crescent.

, titled The Light Of Our Solus 2: Mordin You Can Handle, began on December 2nd, 2017 and Ended in May of 2020, at which point it was succeeded by a third sequel

, titled "The Light Of Our Solus 3: Mordin Meets The Eye".

The Light of Our Solus contains examples of: