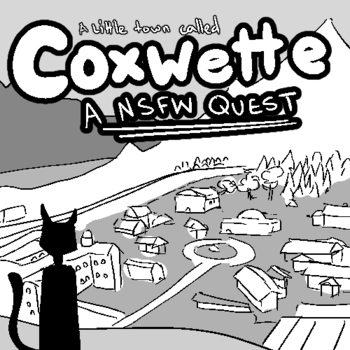 A fugitive cat hops off a speeding train into an isolated town with strange residents and a history. Something something wink wink nudge nudge know what I mean?
Folks call me Charlie. The ladies call me Chuck.
— Charlemagne "The Legend" Llewellyn.
Advertisement:

is an interactive comic that is equal parts Sex Comedy, Mystery Fiction and Town with a Dark Secret, in the same vein as Ruby Quest and its more recent Spiritual Successor Nan Quest. It's hosted on Questden and created by RML

A fugitive, bank-robbing, womanizing cat with a cardigan leaps from a passing train into the titular town and is greeted by the mysterious Harold Pal, a tortoise. Shortly afterwards he discovers that not only is the town mostly populated by single, very available women, but also ghosts, wandering night horrors, legends, magic, mysterious catacombs that certainly do not exist under the library, and nobody can ever leave.

The comic has well thought-out writing from start to finish, switching between steamy to comedy to drama, and is notable for having sex scenes that provide critical, important clues to what's really going on. It has a large cast of characters for such a small town, each with their own hidden secrets. The comic is not safe for work given the number of sex scenes of the somewhat furry but tasteful variety (plus one spider).