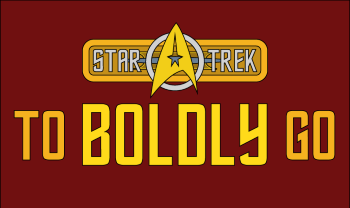 Bringing peace to the stars through strength, diplomacy, and spreadsheets.
"Apparently, there is no such thing as a routine mission in the Explorer Corps. Good to know."
— Captain Michel Thuir

To Boldly Go... A Starfleet Quest is a Star Trek Quest

by OneirosTheWriter on Sufficient Velocity in which players take the role of the Admiral in charge of Starfleet, the exploratory and military service of the United Federation of Planets. All kinds of important matters come across your desk: Political wranglings with the Council; signing off on covert operations; setting a long-term shipbuilding agenda; shouldering the burden of an existential crisis to all life in the galaxy... just another day in the office.

While you may have long since left your days of frontier exploration behind, there's a new generation out there just waiting for their shot. The brightest and bravest of Starfleet's captains form the Explorer Corps. Following in the footsteps of Jim Kirk's legendary five year mission, they are sent forth to tame the final frontier, and to be the Federation's heroes in her hours of need. Of course, their reports end up on the desk of the Commander of Starfleet, creating headaches just as often as they save the galaxy. Sometimes at the same time.

It's not all sunshine and roses out there, however. Starfleet is in perhaps the most desperate state it's even been in, owing to Admiral Cartwright's failed coup attempt a decade prior and the United Federation of Planets' subsequent lack of faith in their ambassadors to the cosmos. Pared down to a mere handful of starships and kept on a tight leash by the Federation Council, the path forward is a murky and treacherous one. Now, more than ever, the citizens of the Federation and the diligent officers of its Starfleet deserve visionary leadership.

The year is 2301. The Council fired your predecessor. Do you have what it takes to lead Starfleet?

The Quest takes place in the form of quarterly turns, interspersed with annual votes and updates on specific topics. You can start reading from the beginning or start participating immediately from the current year (2322 as of 3/6/18); experienced players will be glad to help you get up to speed on the mechanics.

To Boldly Go... A Starfleet Quest provides examples of: