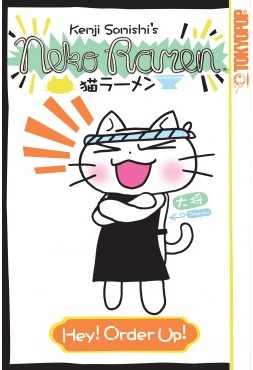 Hey! Order Up!
" A cat makes the ramen."
— Back of the first volume

Neko Ramen is a very Slice of Life manga by Kenji Sonishi, resembling what it may be like to walk into a friendly ramen shop where the chef knows your name and order. But your chef is kind of an idiot. And also a cat.

Taisho, the titular Neko to his counterpart Ramen shop, is determined to show the world, and his straight man, Tanaka-San, that besides the fact that...

...he is in fact a truly great ramen chef.

Tanaka-San believes his ramen is adequate at best.

Compare Peanuts with Snoopy, or most newspaper comics with sentient animals. Unrelated to Cat Soup.