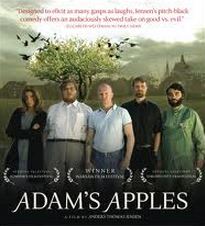 Ivan: The devil is testing us.
Adam: By stopping me from baking a cake?
Advertisement:

It tells the story of the Neo-Nazi criminal, Adam (Thomsen), freshly released from prison, who is ordered to do some community service under the supervision of Ivan (Mikkelsen), a pastor in a small village parish, joins the community of social outcasts sharing the same fate, and chooses as his goal making an apple pie out of the apples growing in the parish's orchard. The main source of drama in the movie comes from the exploration of the differences between the characters and beliefs of both men, one of whom, in spite of his unusually thorny life, has an unshaken belief in the ultimate goodness of God and his creation, while the second believes only in physical strength and determination. They do not discuss much, but the more they come to know each other the stronger the tension is between them, which results in an unexpected ending with a strong Aesopian element which leaves more questions than it solves.