Here is a list of characters and character tropes appearing in Gaunt's Ghosts, broken down into folders for ease of use.

Note that the article contains unmarked spoilers and, per Handling Spoilers, trope names will not be marked. 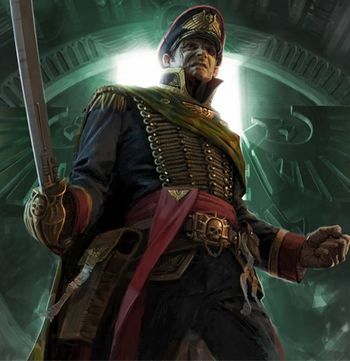 Commanding officer of the regiment. Before its founding he served in other units, most famously at Balhaut with the late Warmaster Slaydo, who granted him his special dual rank. At the regiment's founding, the planet was beset by Chaos and he chose to take the men with him rather than let them die defending it, something not all of them were happy with.

A commissar assigned to the regiment in the fourth book, Honour Guard, initially to police Gaunt but as a proper member by the end. Often does most of the actual commissaring while Gaunt colonels it up.

A wandering Hagian preacher who joins the Ghosts after Honour Guard. Looks after the Ghost's spiritual needs.

One of the Nihtgane partisans from Gereon, he was given to Gaunt as a bodyguard and has stuck by the other man since.

A friend of Ibram Gaunt. The two met when they were students at the schola progenium on Ignatius Cardinal.

The founding members of the regiment.

The Ghost's much beloved main CO along with Gaunt.

Corbec's second in command. Hates Gaunt with a vengeance for abandoning Tanith to die.

The Ghosts' most accomplished sniper.

The Chief of the Ghosts' elite Scouts.

The youngest of all the Ghosts and originally just a civilian. Gaunt rescued him from Tanith on a whim and he quickly becomes the Ghosts' 'lucky mascot'. 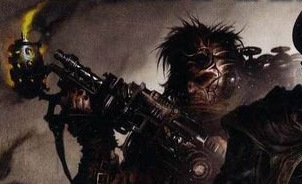 A miner from Vervunhive who helped to organised the resistance in the chaos-held parts of the city. Joins the Ghosts after Vervunhive is abandoned, and is seen as a hero by the ex-hivers in the regiment.

A one-eyed Vervunhive miner who keeps the men of his work shift organized despite the chaos, and uses them to help the war effort and the other refugees. Joins the Ghosts after Vervunhive is abandoned. He is eventually revealed to be a Psyker and is taken by the Black Ships during the events of Sabbat Martyr. Returns to play an important part in Only in Death, where he dies. 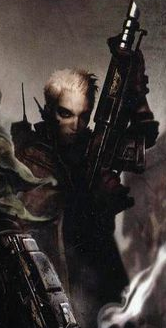 An ex-hive ganger from Vervunhive who joins up with the Ghosts after Necropolis. Later proves herself to be a particularly badass Action Girl.

Like Banda, another Verghastite sniper, and a former member of the Scratch Companies during the Siege of Vervunhive.

A decidedly unpleasant ex-hive ganger who joins the Ghosts after the defense of Vervunhive, and generally the cruelest and most vicious member of the Ghosts.

A Vervunhive war-orphan (though actually the biological child of Gol Kolea) adopted by Tona Criid. Once he reaches adulthood, he chooses to join the Ghosts.

A former scratch-company hero from Verghast, commanding six companies sent to reinforce the Ghosts just prior to their mission to Salvation's Reach.

A veteran of the Verghast war who joined the regiment with Pasha's influx. Previously served in the planetary defense force with Ban Daur.

A native of Belladon, placed in command of the Ghosts during Gaunt's time on Gereon. He has a younger brother, Captain Jakub Wilder, whose unit finally manages to catch up with the Ghosts in Salvation's Reach.

The Imperial Saint after whom the Sabbat Worlds are named. Six thousand years ago she was a humble peasant girl on Hagia who received a vision from the Emperor, inspiring her to set off on a journey to bring the systems around her under Imperial control. After the Sabbat Worlds are overrun by Chaos in the 41st Millenium, Saint Sabbat returns to aid the imperials in their hour of need.

The general in command of retaking Fortis Binary in First & Only. Actually much more cunning than he seems.

The general who oversaw the Ghost's actions on Phantine, as well as in many other theatres afterwards. Notable in that he actually gives the Ghosts the respect they deserve.

Another of the generals serving under Warmaster Macaroth. Sturm sees the Ghosts as savages and barbarians. Needless to say, he and Gaunt do not get along well.

A general who was one of Warmaster Slaydo's most trusted subordinates. Described as a conqueror of worlds, Cybon has since fallen out of the spotlight since Macaroth took over.

The previous Warmaster and the man who began the first push to reclaim the Sabbat Worlds from the forces of Chaos. Killed in action on Balhaut.

The second Warmaster who takes control of the Crusade after Slaydo's death. Unfortunately does not hold Gaunt in nearly the same regard as his predecessor - or so it seemed, anyway.

The son of Lady Merity Chass of Vervunhive, growth accelerated, and sent to the front lines to meet the famous hero of Vervunhive. He's also Gaunt's son.

The shipmaster of Highness Ser Armaduke, tasked with shipping the Ghosts on to the Salvation's Reach operation. His career has been in steep decline, more because of politics than any lack of competence on his part.

The following tropes apply to all of the three Marines seconded to the Tanith First.

Brother-Sergeant Eadwine, of the Silver Guard

One of three Space Marines ceded to Gaunt's strike force in Salvation's Reach.

One of three Space Marines ceded to Gaunt's strike force in Salvation's Reach.

The last of the three Space Marines ceded to Gaunt's strike force in Salvation's Reach.

Chaos overlord who commanded the resistance against the Sabbat Worlds Crusade. Killed by the Imperials in a raging battle on Balhaut, the same battle where Slaydo was killed. His death left a power vacuum, which was eventually filled by Urlock Gaur.

Overlord and supreme commander of the Chaos forces in the Sabbat Worlds, having risen to the top of the heap after Balhaut. Commands the notorious and extremely deadly Blood Pact, the most competent of the Chaos troops. He has yet to face the Ghosts directly, although his Blood Pact has; mostly, his cadres form the "main fronts" where Macaroth's elite fights. Commands from the the "fortress world" Morlond, until it is taken by Imperial forces in Sabbat Martyr.

A Chaos general and one of Gaur's lieutenants, Innokenti was one of many Chaos commanders sent to flank the main Imperial advance. His forces attacked the Khan Group, home to many of the forge worlds responsible for Imperial resupply. His group laid siege to the world of Herodor in Sabbat Martyr due to rumors that Saint Sabbat had been reincarnated on that world. He dies in combat against Sabbat herself, at the end of Sabbat Martyr. 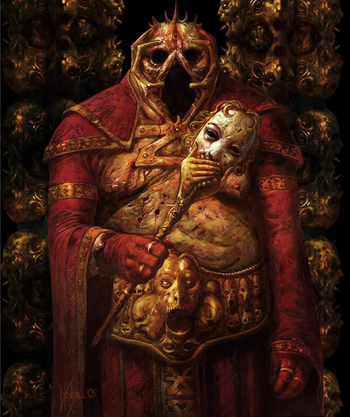 Chaos general and leader of the Sons of Sek, another faction of Archon Gaur's army. Becomes the senior Chaos leader on the secondary flank when Enok Innokenti is KIA. Currently at large after losing several planets to the Ghosts.

One of the Chaos warlords who survived Balhaut, Nokad the Blighted, aka Nokad the Smiling, is a Nurgle devotee and minor thorn in the side of the Crusade armies. He believes in leading from the front and is skilled at rallying his armies. Killed in action on Bucephalon, courtesy of a headshot from "Mad" Larkin.

Another Balhaut survivor, Sholen Skara was a notorious Khornate death-worshiper, thought to have ritually slaughtered a billion Balhauteans in camps. His bloodlust was so all-consuming that he would even kill his own troops rather than have them captured or defeated by the Imperium. Captured by the Ghosts and handed over to the Inquisition during Ghostmaker, when a forward team blows up a chunk of his base, panicking him into sacrificing his own men.

A prominent Chaos warlord and powerful psyker, Pater Sin led a Chaos force to capture the shrineworld of Hagia, birthplace of the Saint. He escaped when Imperial forces, including the Ghosts, recaptured Hagia, although his status among the Chaos commanders was reduced dramatically due to his failure and the loss of most of his troops. Reappears in Sabbat Martyr as one of the assassins tasked with killing the Saint, and is killed by Corbec.

Commander of the Blood Pact forces on the captured world of Phantine, Slaith was a charistmatic warlord and Khornate devotee whose abilities strained the Imperial efforts to reconquer the world, prompting the Imperial Crusade to attempt to assassinate him to deal a crushing blow to enemy morale. After surviving several attempts by Ghost snipers to kill him, Slaith perishes when a bomb planted by Mkoll detonates inside his command centre.

A notorious and deadly Chaos general known for his tactical genius and love of absurd war machines. He led the attack on Verghast in Necropolis, leading the forces of Ferrozoica Hive City. Killed in single combat by Gaunt, though not before very nearly killing him.

Nine assassins raised by Enok Innokenti to kill Saint Sabbat in Sabbat Martyr. They include three alien loxatl, deadly mercenary triplets with armored skin; Pater Sin, a warlord himself, and two of his psykers; a Dark Eldar Mandrake; the best sniper in the second front Blood Pact; and a Chaos Space Marine Dreadnought.

A tall, horned, sexless daemonoid lifeward, charged with guarding General Noches Sturm while Sturm is being held on Gereon.

A deadly agent of Anarch Sek, who use a combination of augmetic surgery, psyker tricks and the ability to alter their facial appearance and voice at will to impersonate Imperial personnel to get close to assassination targets. First appear in Blood Pact and become a major threat in 'Salvation'''s Reach'.

The surrogate daughter of Tona Criid and a hidden Woe Machine created by Heritor Asphodel, effectively becoming a Chaotic sleeper agent embedded in the Ghosts for years.