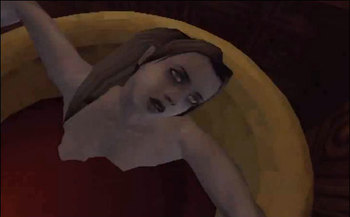 "This isn't... really... happening!
The first M-rated game ever published by Nintendo pushed gamers to the edge of sanity and back. A legitly scary game, the sole purpose this game was made was to fuck with you. Your head randomly falling off, misplacement and, of course, the legendary DOS prompt* actually the Blue Screen of Death. Genius. The lower your sanity meter goes, the more screwed up the game gets. This truly is a psychological thriller.
— ScrewAttack's Top 10 GameCube Games

That quote says it all. Perhaps the game did its job too well, as these entries will attest.