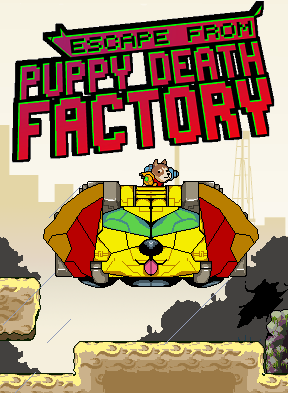 Escape From Puppy Death Factory is an online game available on Adult Swim's website, made by one Mr. Podunkian. You play as futuristic dog Laika "K9" Ludryavka, who has returned to the Earth from space 20 years after a terrestrial nuclear conflict. Detecting the cries of captive puppies not far from where the conflict began, K9 sets out to locate and rescue them through the various environments of an apparently-abandoned factory. As K9 explores the factory and recovers puppies, she gradually learns of its backstory, as well as the possibility that it is not completely empty.

Gameplay revolves around K9's Swap Gun; Shoot its projectiles at a blocky object or an enemy, and it and K9 will switch positions. Gameplay quickly becomes complicated, involving lasers, electrical circuits, refracting mirrors, explosives, timed puzzles, and other gimmicks. Many puzzles allow for experimentation and can be solved in more ways than one, which is required to fully navigate the factory and recover all the puppies.

Adorable and snarky tropes include: