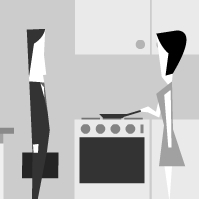 Every Day The Same Dream

is a 2009 Adobe Flash game by Paolo Pedercini of Molleindustria. He describes it as "a short existential game about alienation and refusal of labor."

The game is considered by many to be an important proponent of the 'games as art' movement, although some critics, including Jim Sterling, have criticized the game for its strictly linear structure, ambiguous ending, and an inherent lack of interactivity.