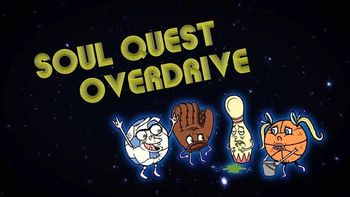 Soul Quest Overdrive was a short-lived Spin-Off of Aqua Teen Hunger Force, featuring the three characters from the "Bible Fruit" episode re-imagined as sports equipment rather than fruit, and with a fourth character - an angry Scottish punk-rocker soccer ball - added in. Mick (Gavin McInnes), Mortimer (H. Jon Benjamin), Bert (David Cross), and Tammy (Kristen Schaal) are a group of Evangelical Christians who, to put it mildly, do not behave in a very Christian manner. Drug-addicted, sex-crazed, and prone to extremely impulsive and destructive behavior, the cast of Soul Quest Overdrive make the cast of Aqua Teen Hunger Force look positively sane and well-balanced by comparison.

Soul Quest Overdrive, after losing an online pilot contest to Cheyenne Cinnamon and the Fantabulous Unicorn of Sugar Town Candy Fudge in 2010, nonetheless received a series order for six episodes. Four episodes aired once at 4:00 AM on a Tuesday in 2011 with no promotion, and the show was never aired again.